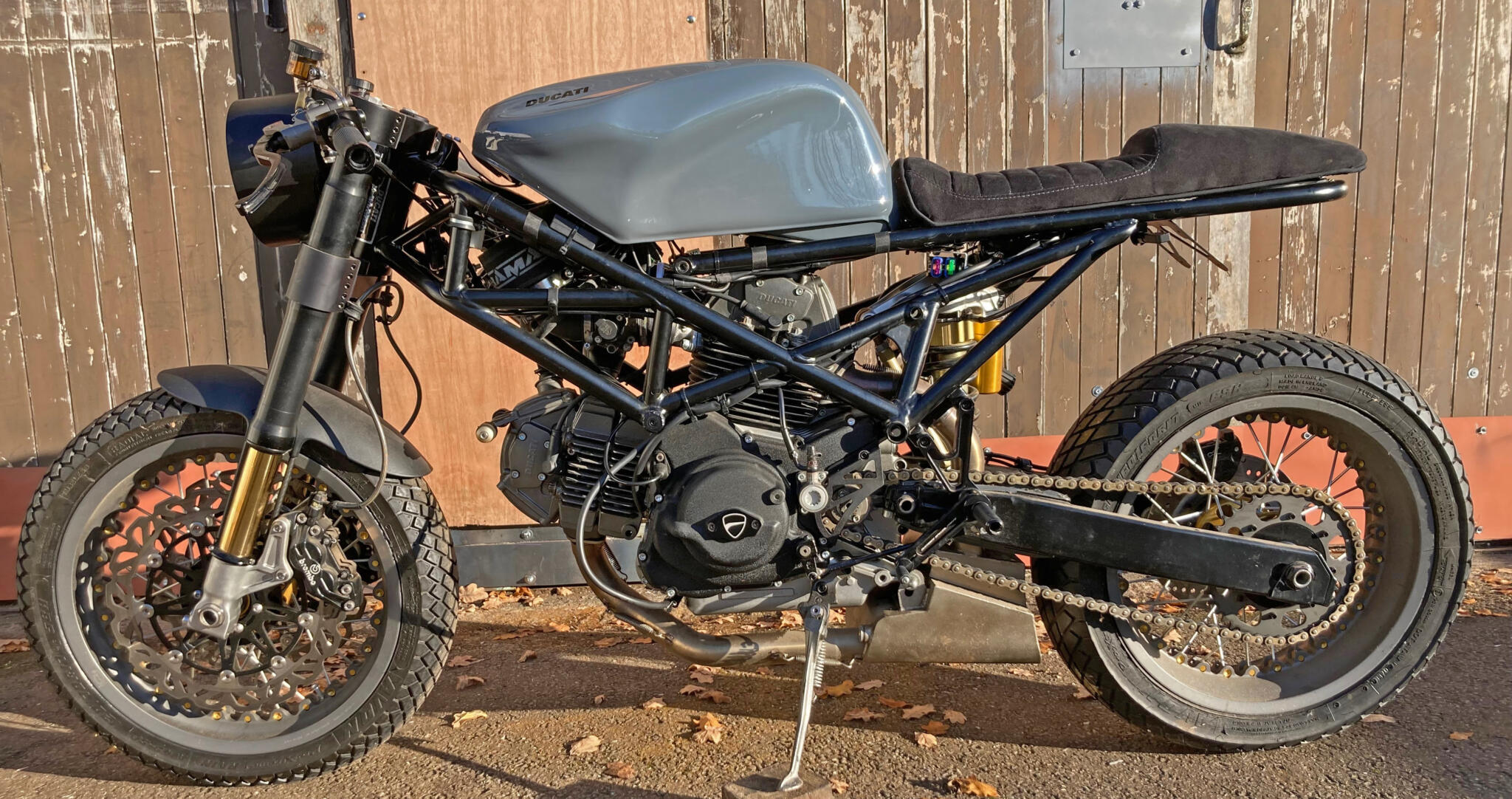 After the initial build, William is planning a redesigned seat and closer fitting tank 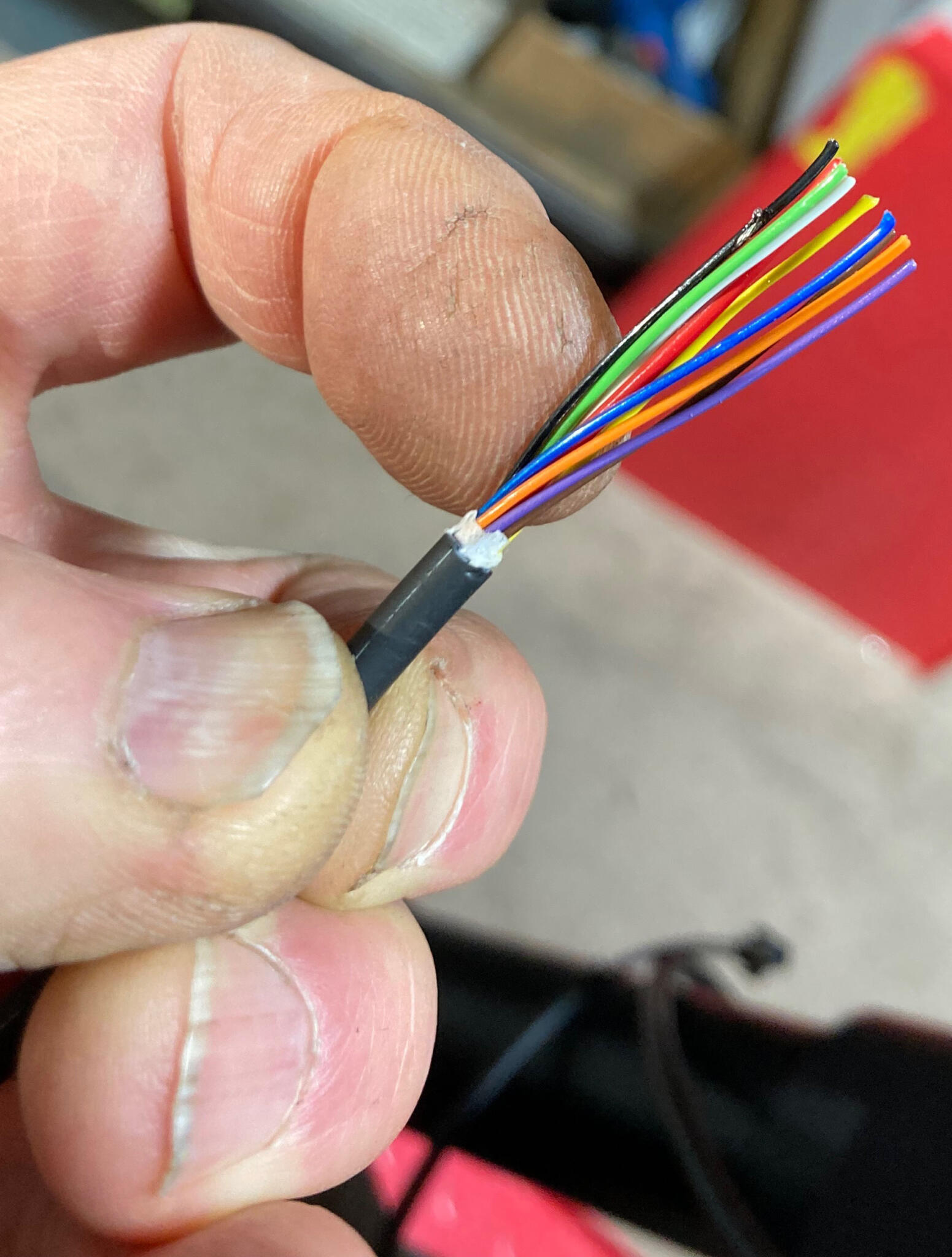 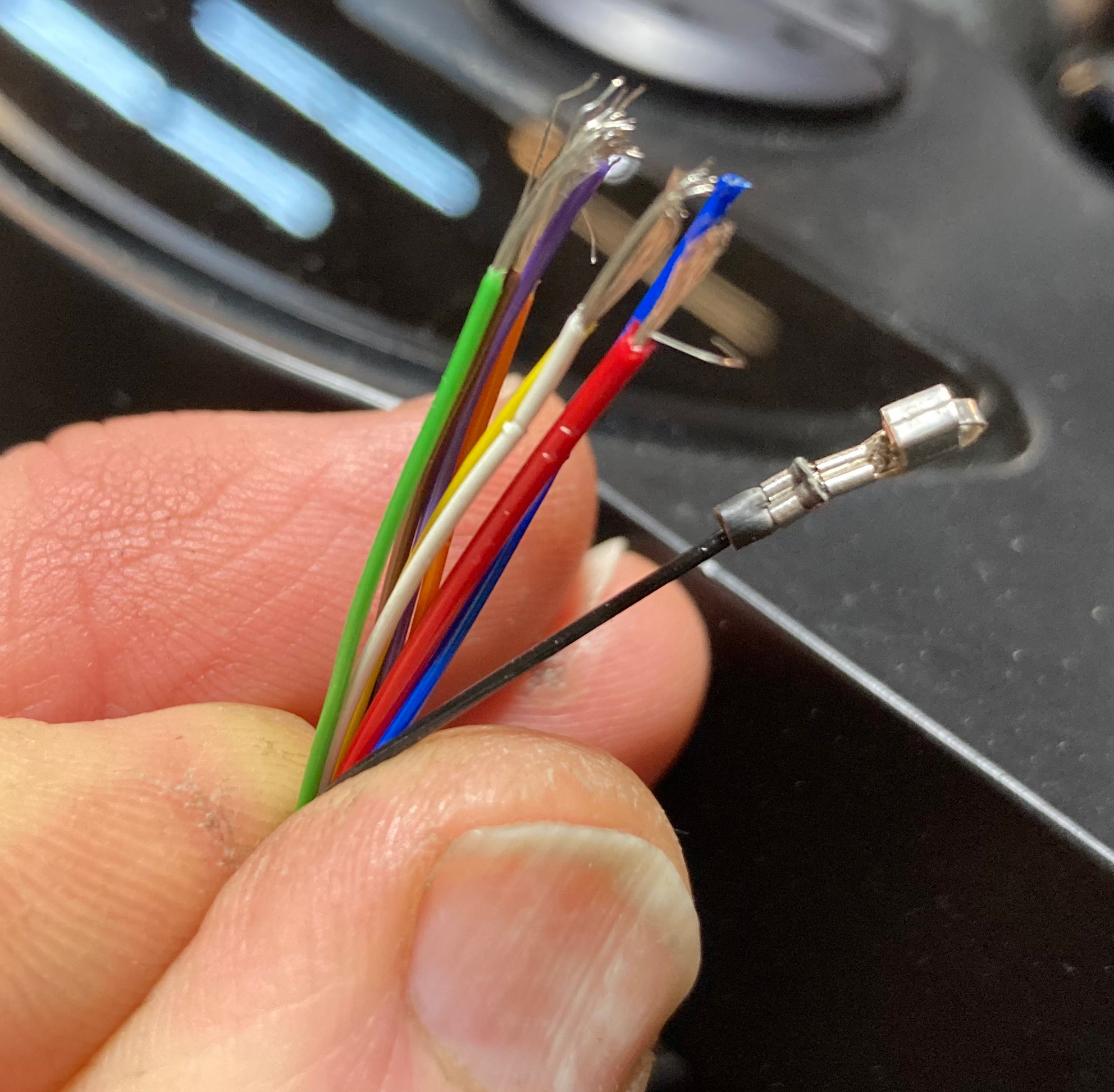 One solution is tiny SM connectors, with the insulator crimp packed out with 1mm PVC sleeve 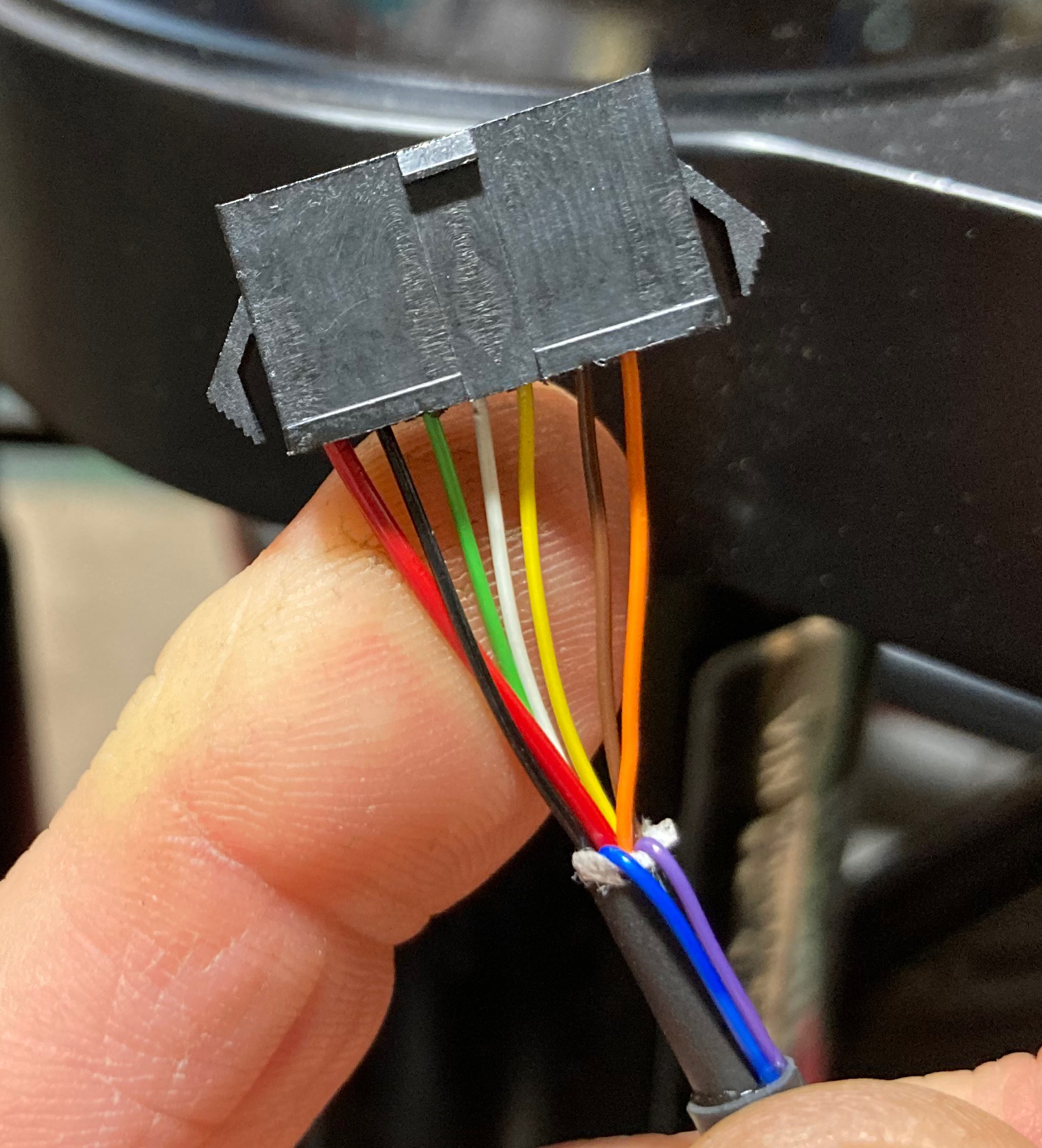 Here’s the finished plug. The purple and blue cables are redundant 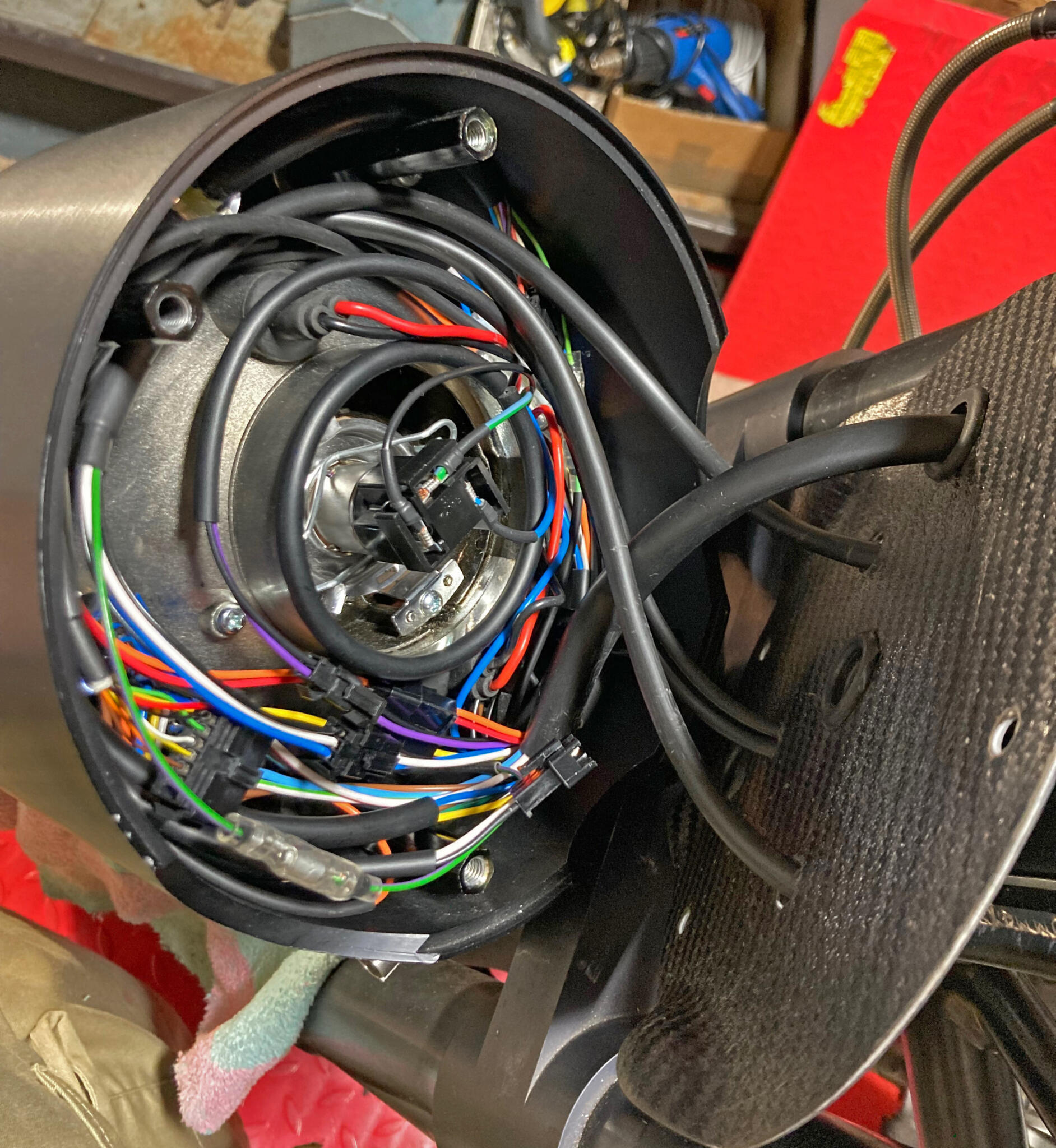 The headlight holds the plugs and cables for everything on the front end, plus a shrouded bracket for the M Button, and another for the Motogadget Breakout Box which the dash needs to display warning lights

William built this bike for the 2019 Bike Shed event – the same show I took my Enfield Meteor 500 project bike to. He did the whole thing himself, including a very bold attempt at the electrics. It worked fine – but he wasn’t happy with the neatness and had doubts about how long it would last.

He plans a fair bit more work on the bike, including a recoating and reworking of the frame, so I decided to make the loom as removable as reasonably possible.

Part of the bike’s style is a whole bunch of high-end electricals: Motogadget M Unit, push-button switchgear, M Button and Motoscope dash; Rizoma indicators which also act as tail/brake lights; and a far out cylindrical headlight which defies all convention. All these items needed stitching together in a way that made each of them individually replaceable, and as invisible as poss. Needless to say, the Motogadget stuff uses tiny little wires.

On top of that, it’s an injected bike, so the ECU uses a fair selection of sensor plugs. These too need to be tidy and unobtrusive. William had already blanked off around half the ECU cable connections and the engine still works, so all I had to do was copy his modifications. The ECU uses tamper-proof plugs, so I opted to extend the original wires rather than hunt down expensive new plugs. I also had to change a lot of the cable colours: with shortages these days you can’t always find the tracer cable colours you might want.

William kindly gave me carte blanche to reposition the various electricals (fuses, solenoid, reg rec, M Unit) to keep things as simple as possible. At such times it really helps to have a lathe and fabrication bench. That way you can design and make the spacers and brackets you need.

Disappointingly, I couldn’t run the bike when the loom was finished. The starter motor had developed a fault, possibly brought on by its main terminal having worked loose over time. William’s next stop is BSD Performance, just up the road from the RR workshop, to sort that issue, and optimise the fuelling. 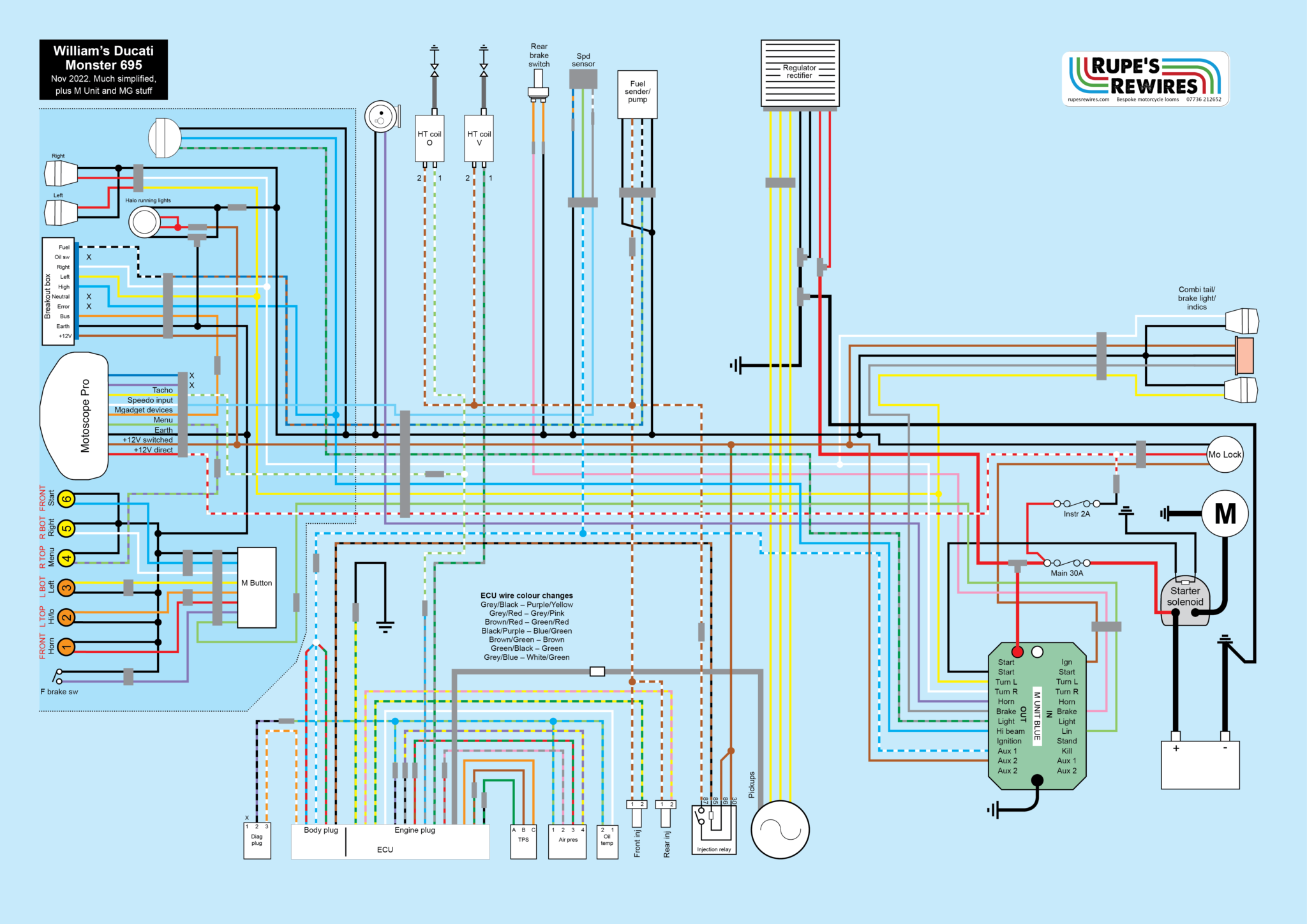 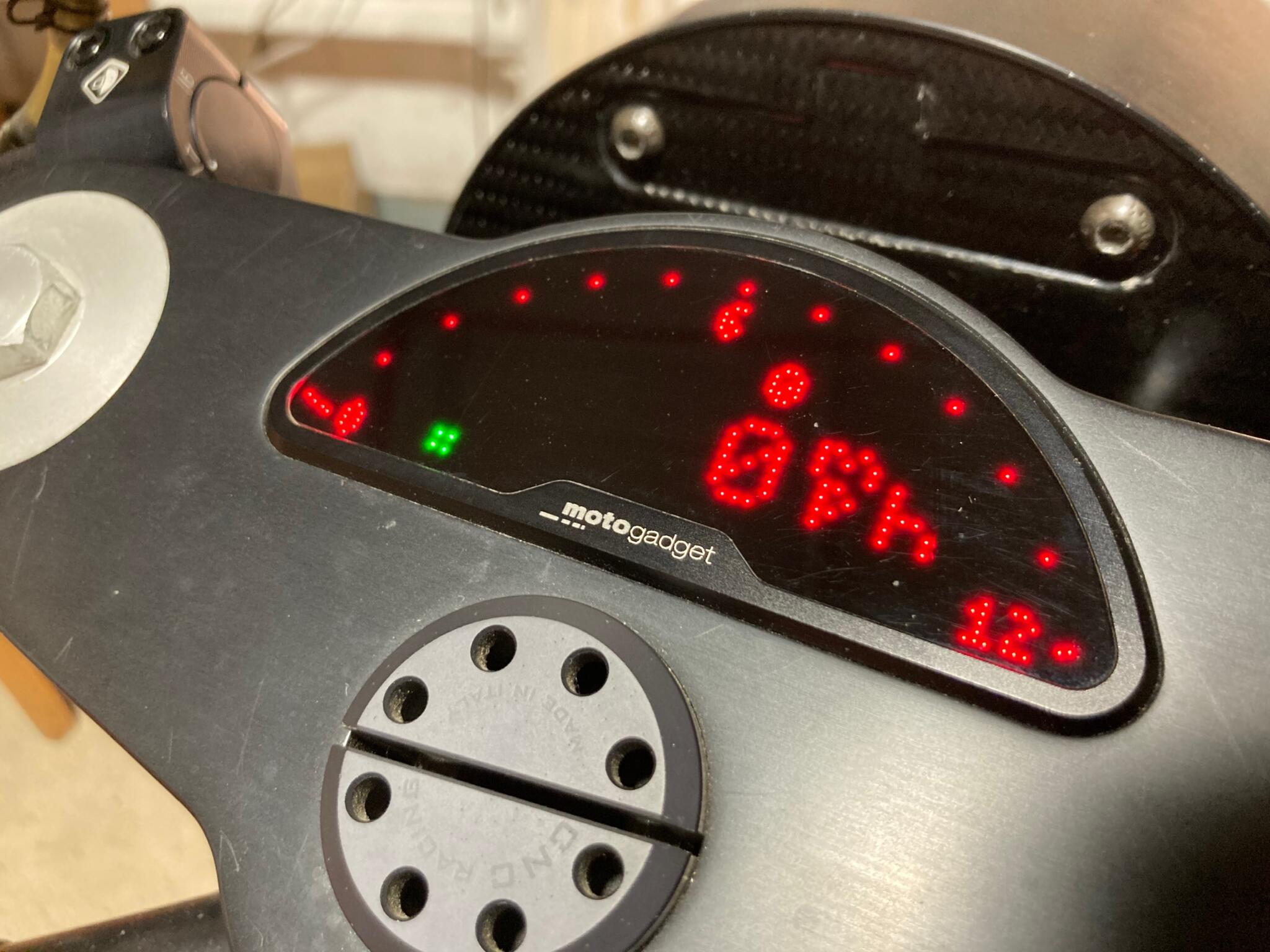 The Motoscope is one of the coolest dashes you can get, although its response speed is not as fast as other dashes 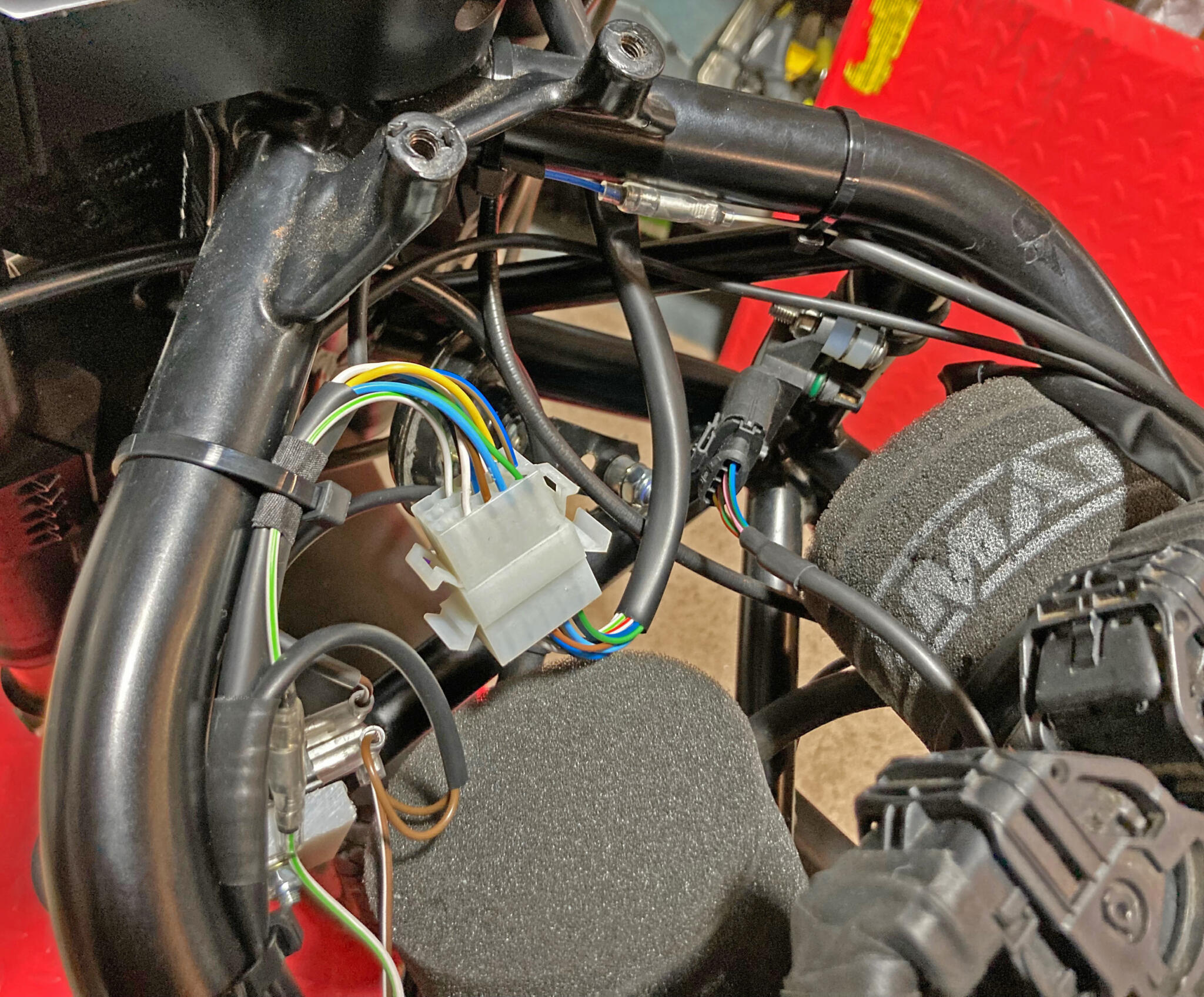 Temporary brackets for the pressure sensor, horn and main relay, plus a big plug for the headlight assembly 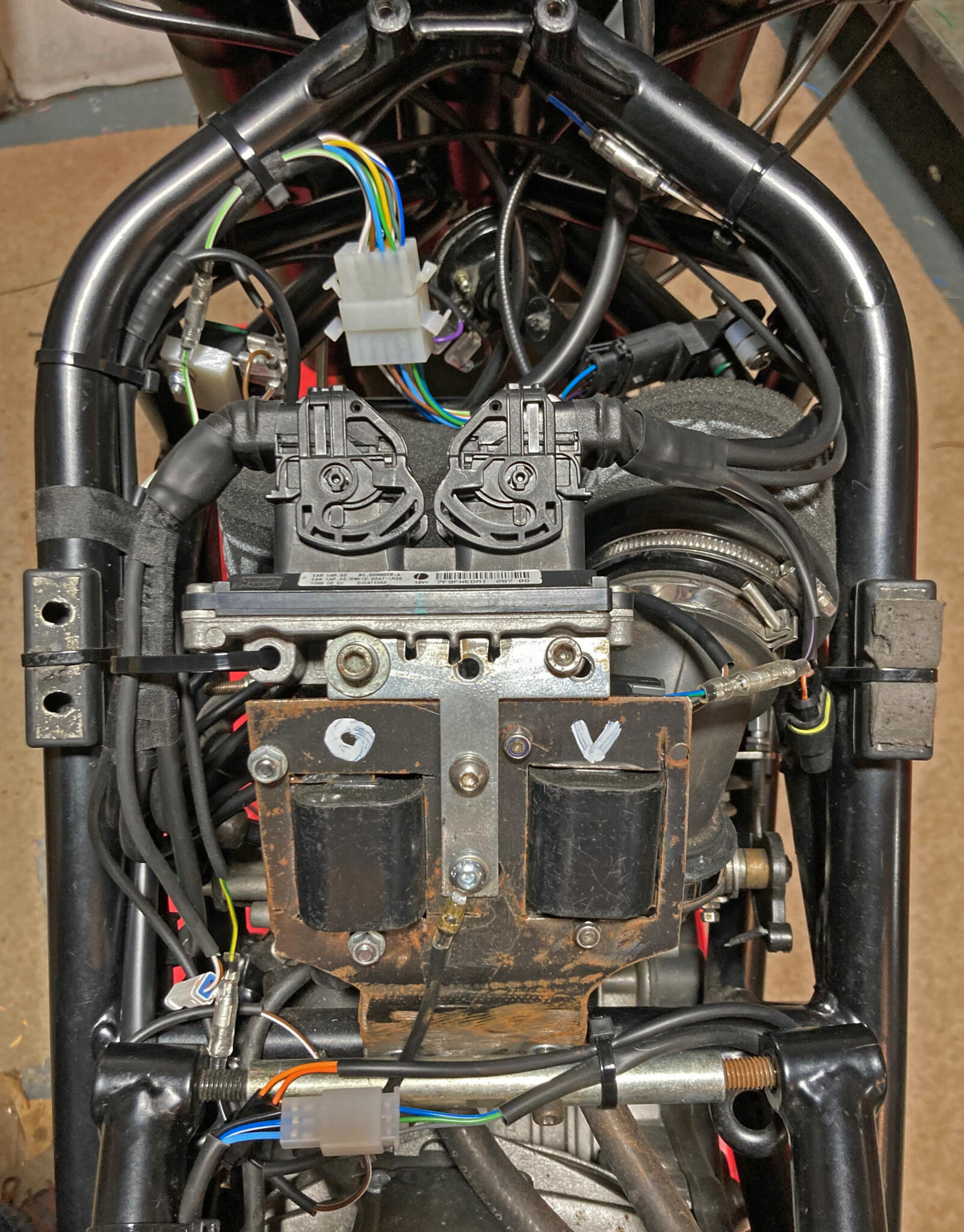 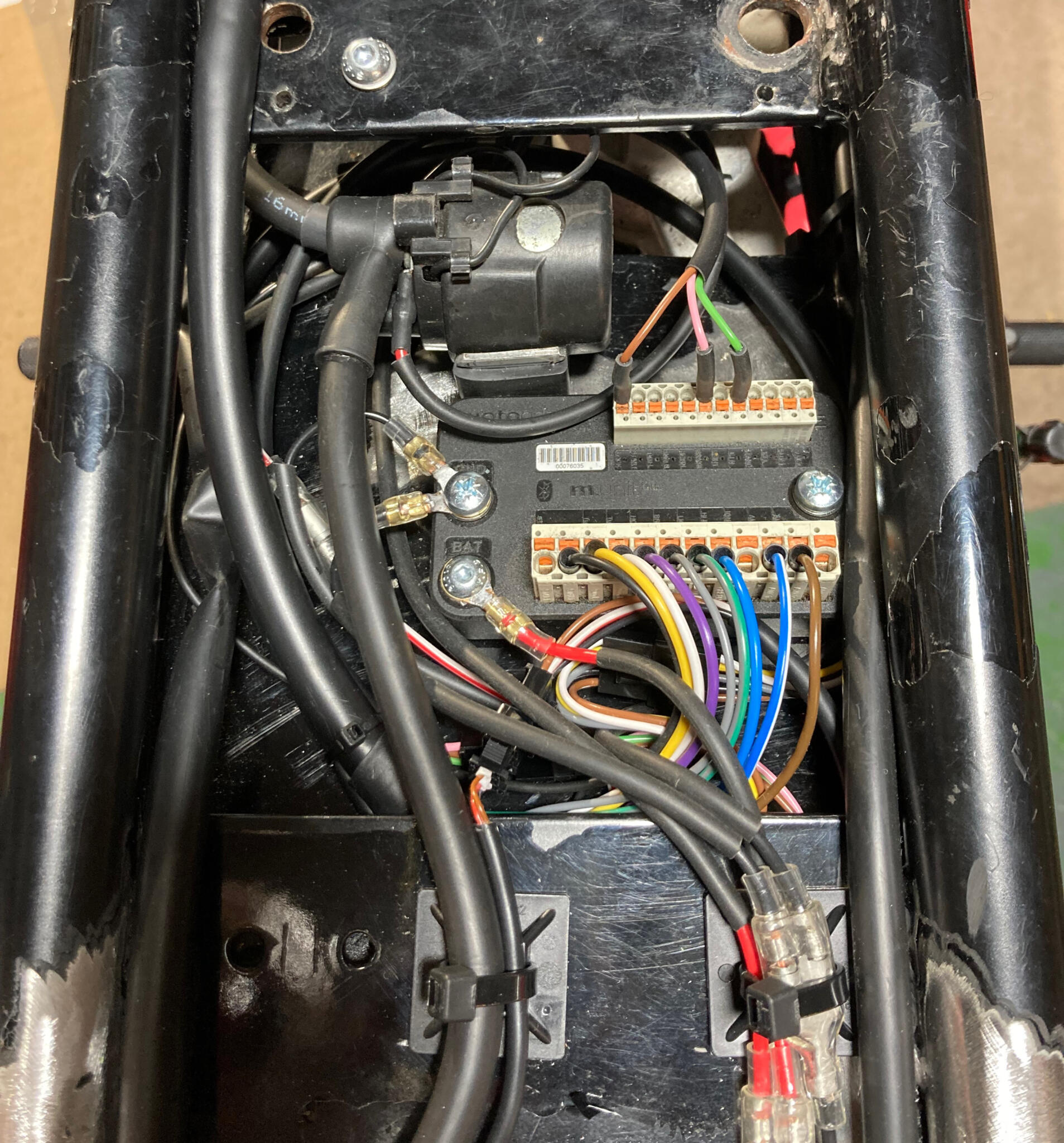 Starter solenoid and M Unit hang out under the seat. The M Unit is needed to run the push-button switchgear 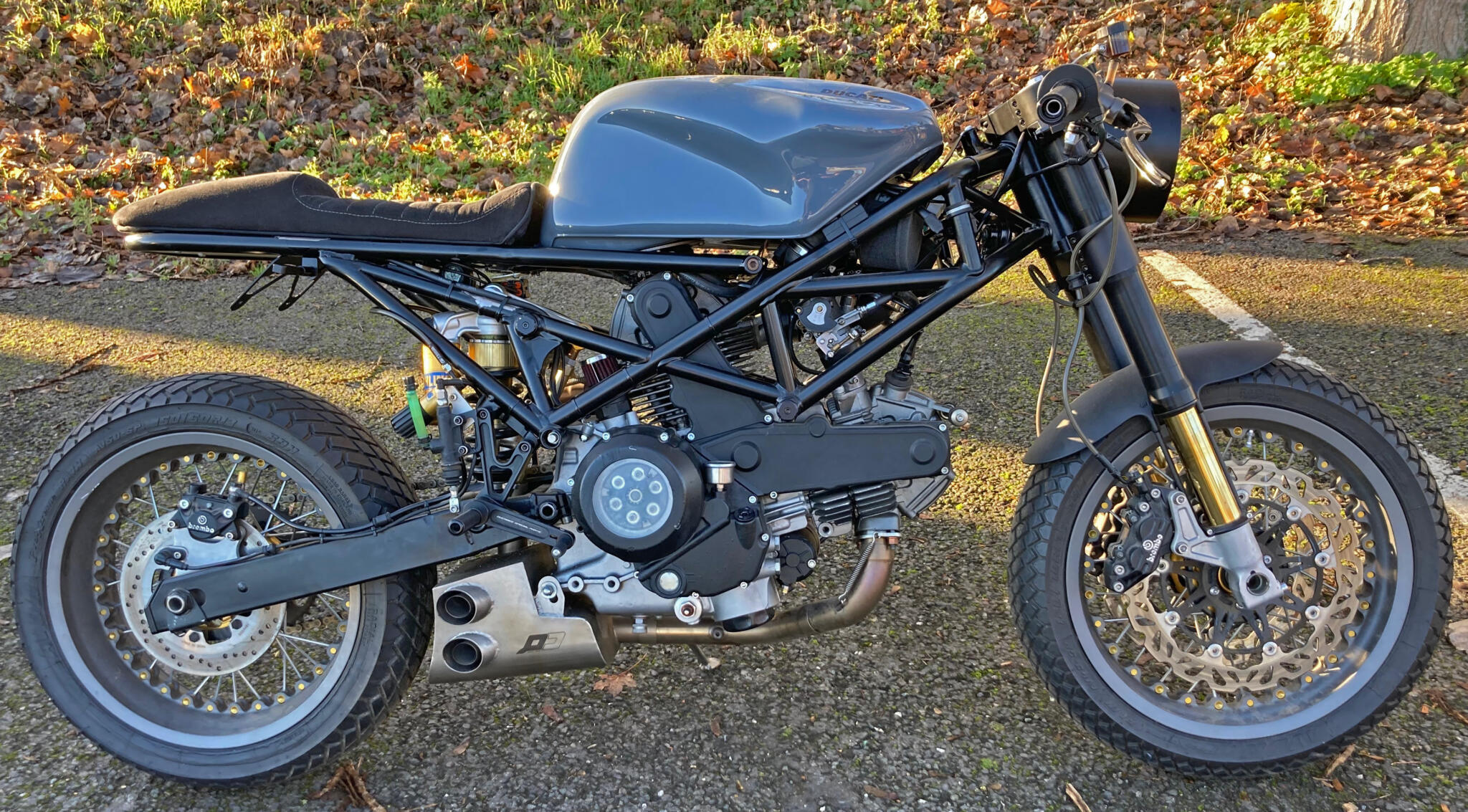 Trick wheels are standard issue on some MV models