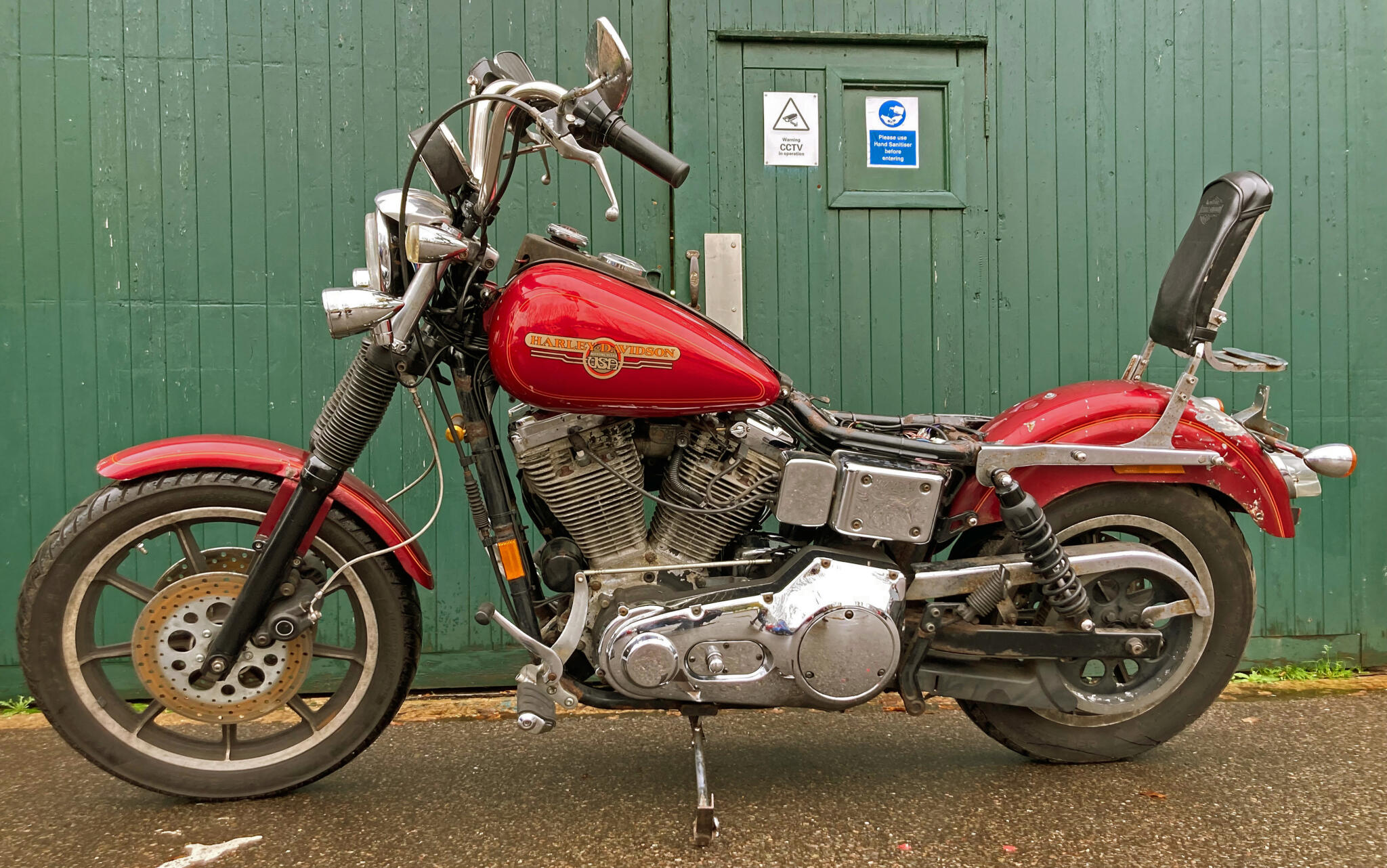 Most hogs I work on are gleaming, cherished things. This one is an all-weather commuter 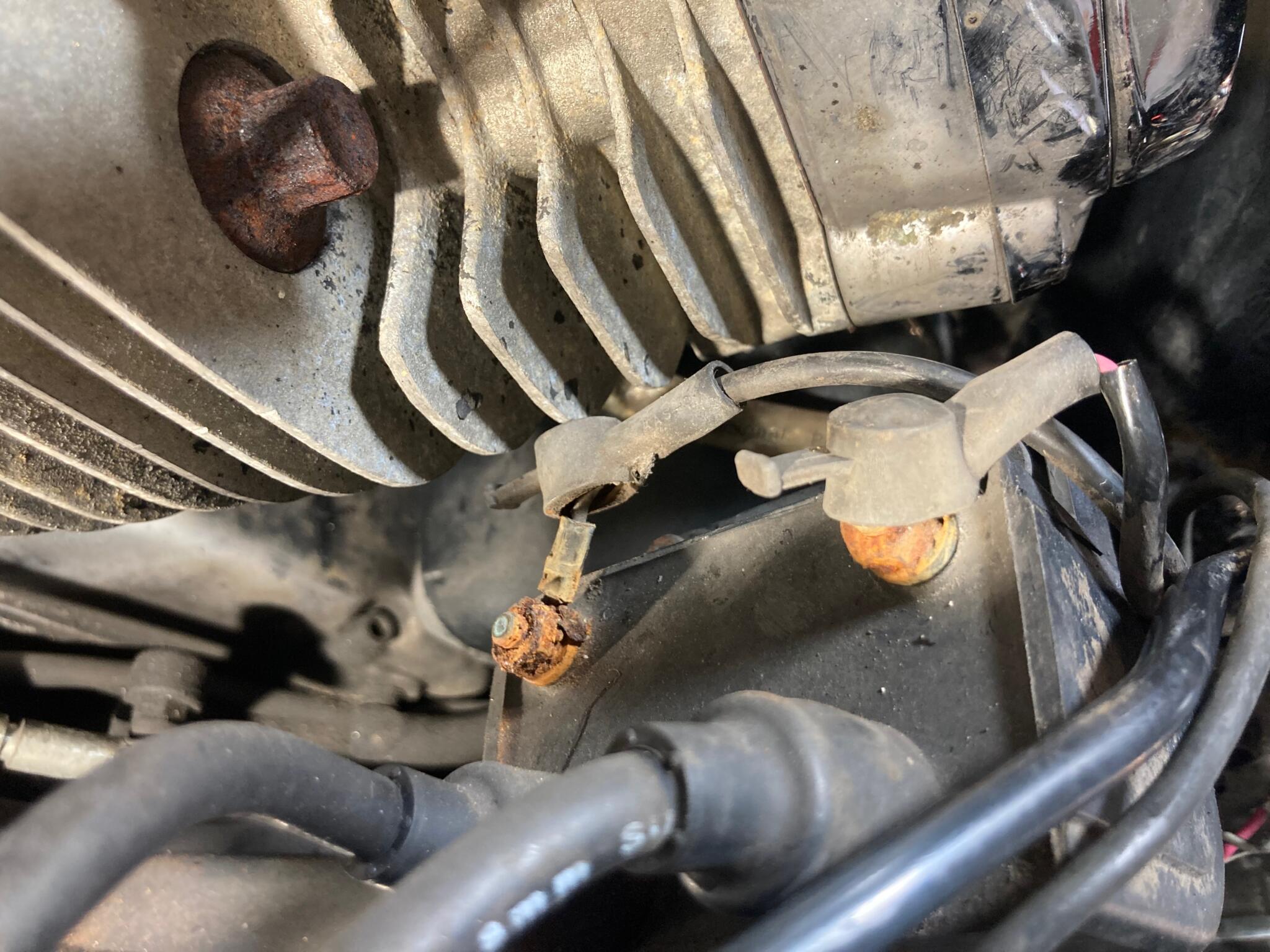 Here’s a little taste of how it was when it arrived. These are the ignition coil terminals 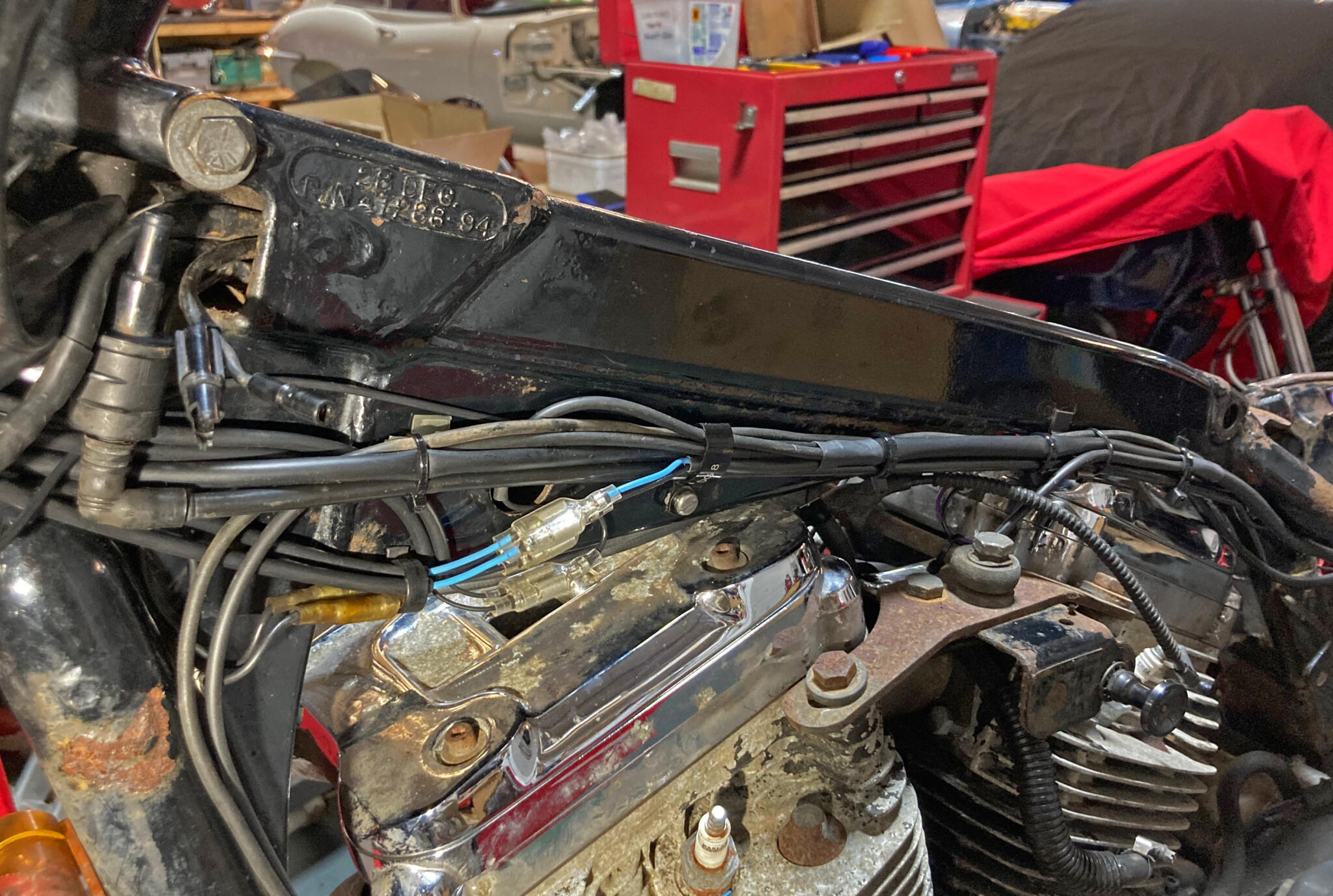 Harley do electrics in their own weird way. Half this loom runs through the frame. The rest sneaks up the side 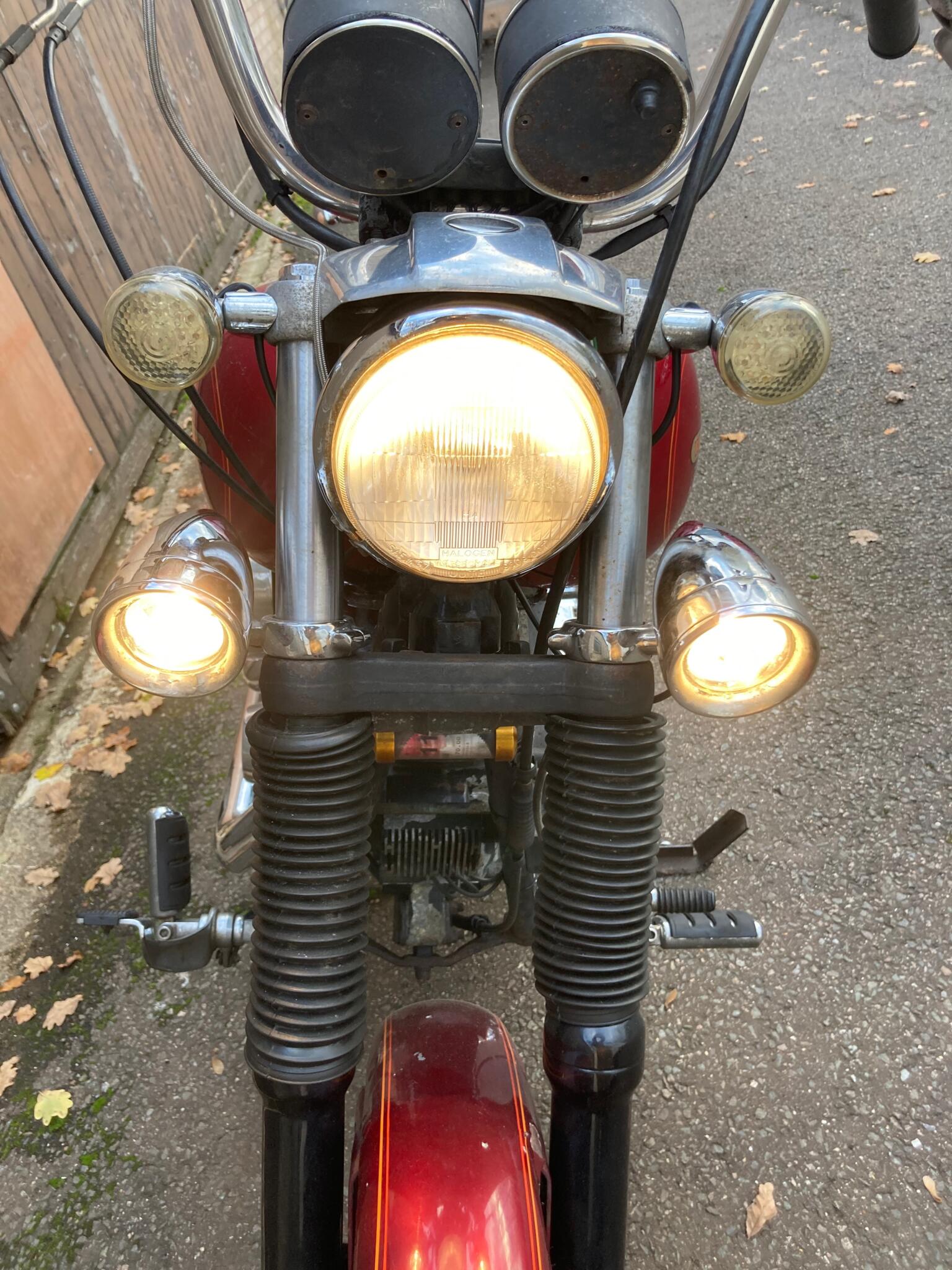 For most people a commuter is a little Kawasaki ER-6 or similar. For Mike, it’s a 1340 Harley. He spent ten years chugging this old girl to work and back, then laid it up in storage for three more. By which time the electrics were letting him know they weren’t happy.

My first discovery: the rear mudguard is seized on. It would come off of course, but you’d need lots of heat, air tools and the back wheel out. Not to mention a new mudguard and bolts. Not possible in a workshop full of cables and crimp tools. This in turn meant that I couldn’t replace the through-the-frame wires which had been in the frame spine since the day they were inserted in 1997.

So we needed a solution that worked round that problem. It turned out to be lots of bullet connectors, so apologies if the underseat area is less elegant than you might wish.

Just one wire had gone awol in all that time: the power feed to the neutral and oil warning lights. I ended up stealing some volts from the speedo illumination light instead. It sounds a bit round-the-houses but it produced a neat, weatherproof solution that you can’t see. I also used a miniature SM series connector to join the warning lights to the rest of the loom. SMs are handy little things for cables that only carry light currents.

Mike asked for a connection for heated grips and a 12v Hella socket for a heated waistcoat or similar. These got their own fuses and circuits. He also wanted the front spotlights to come on with main beam. All this extra stuff is fine as long as you check how much current will flow through the supply and earth cables, and upgrade accordingly. In this case I ran the extra accessories via a relay, to keep the ignition switch from being overloaded.

After much effort the loom was complete. But the ignition remained obstinately dead. Testing according to the Harley manual suggested both the pickups and the ignition module were bad. The most cost effective and rapid solution was new pattern pickups at £68 (genuine ones were on back order); and Ignitech ignition at £130.

Once these were fitted, the bike fired up. Well, almost: it fired, but wouldn’t catch. The carb was gushing fuel – hardly surprising after all this time. But a carb strip is a minor issue. After that, Mike’s trusty workhorse will be back in business. All in all, a marathon job! 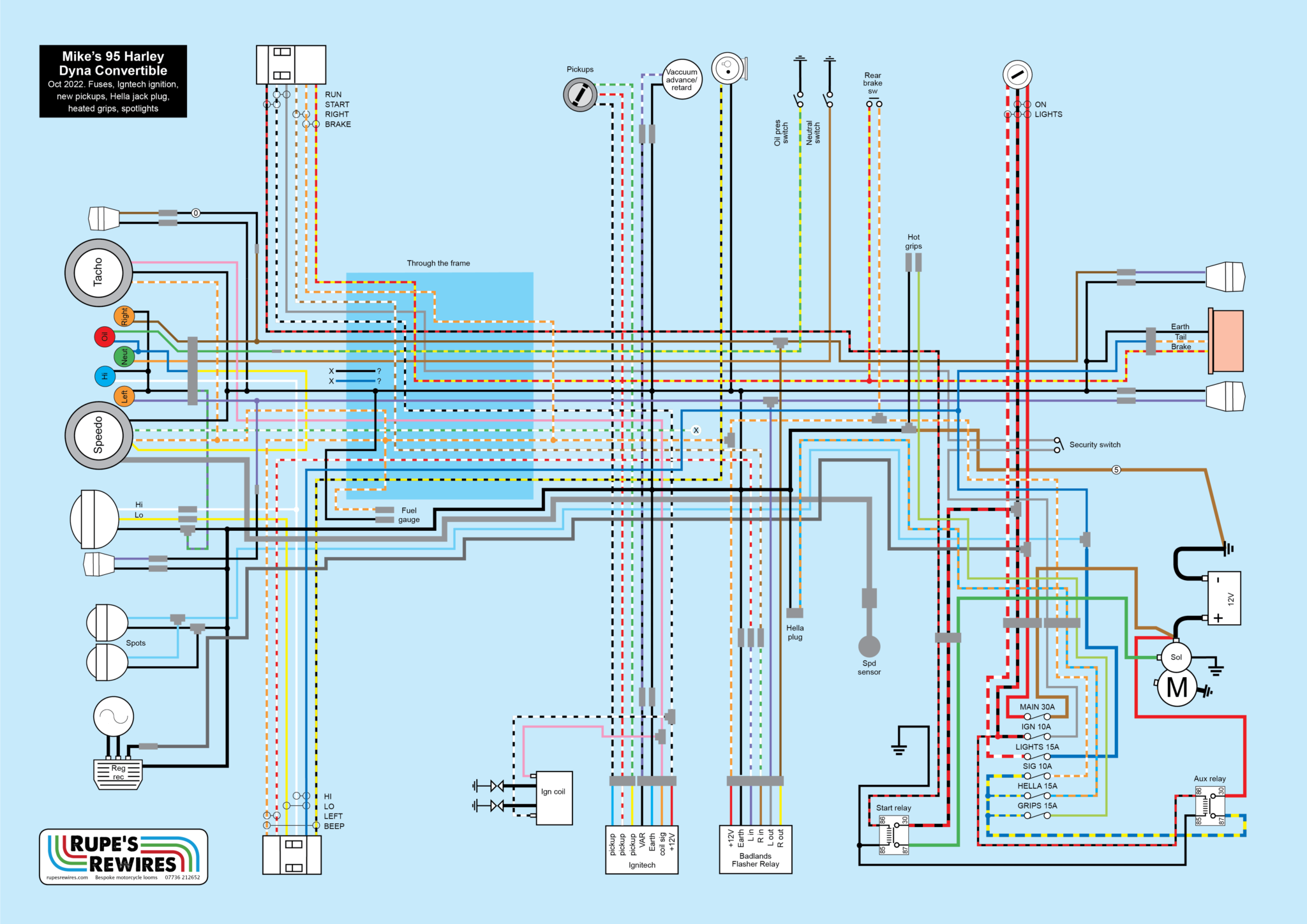 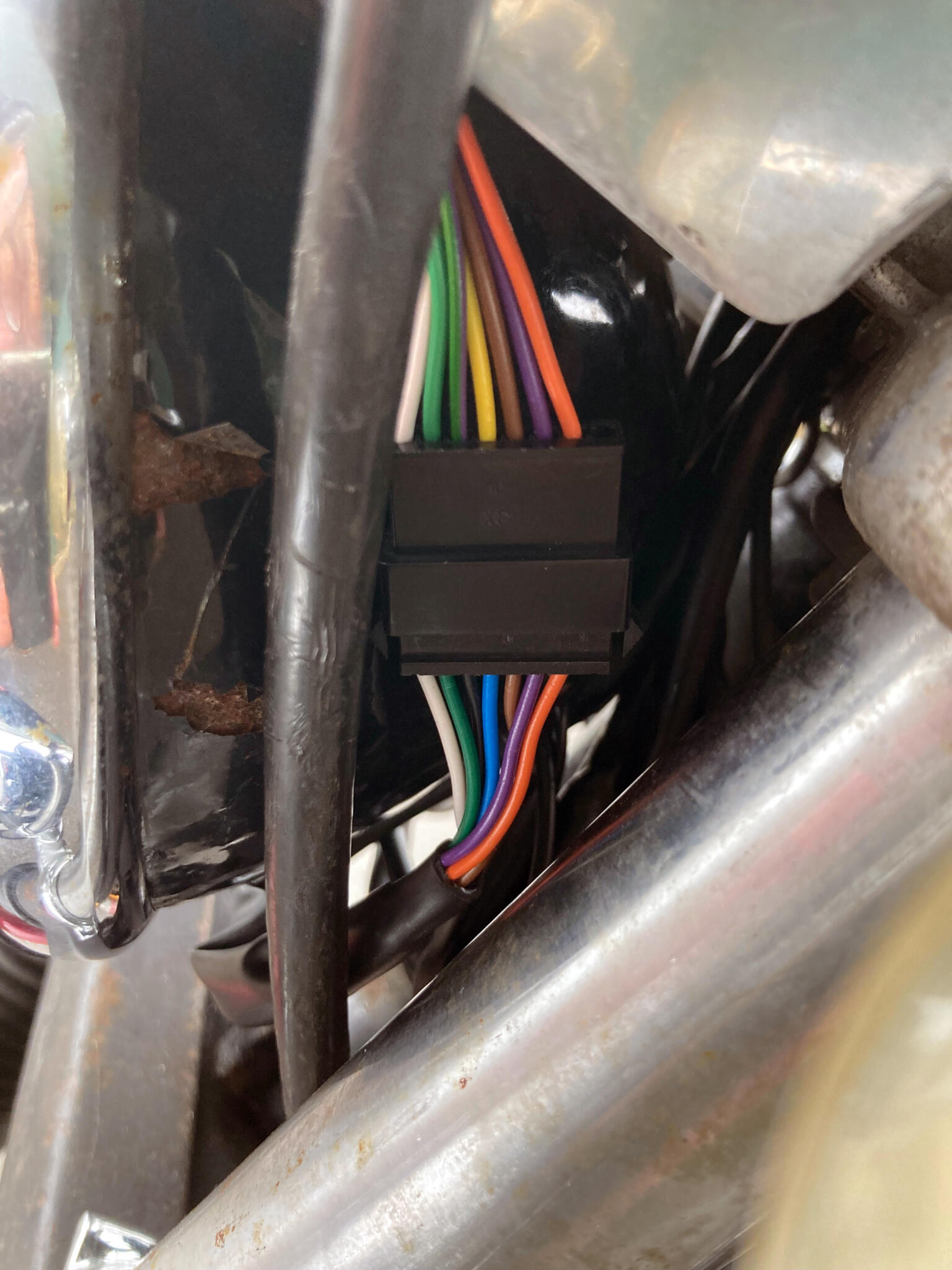 Original warning light wires went straight from the frame spine to the bulbs, but they were damaged. Once the repairs were done I used a tiny SM connector to rejoin loom and lights 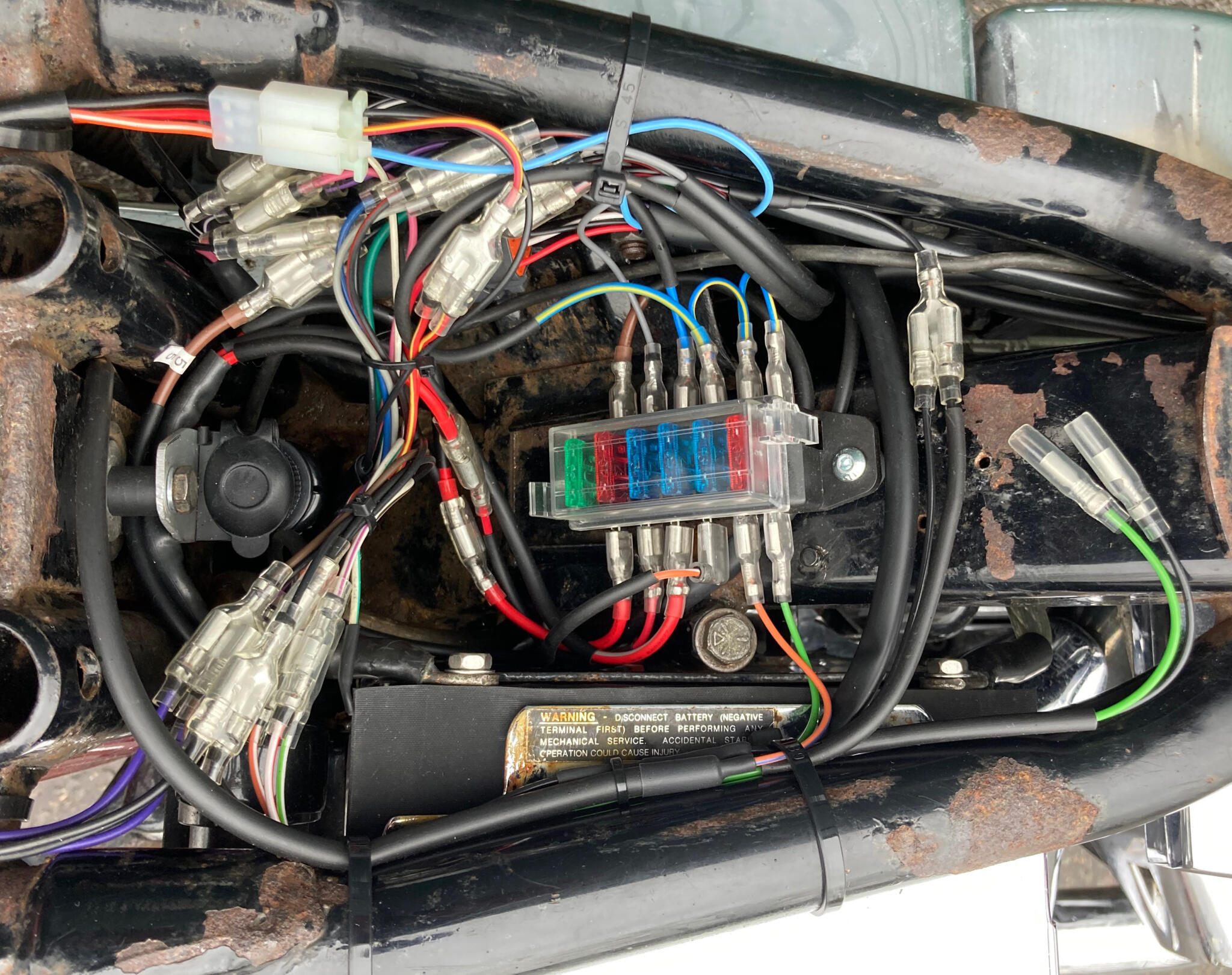 It’s not super tidy, but it had to be like this. Hella socket on left, six way fuse box middle, heated grip connectors on right. Every bullet is sealed and lubed with silicone grease