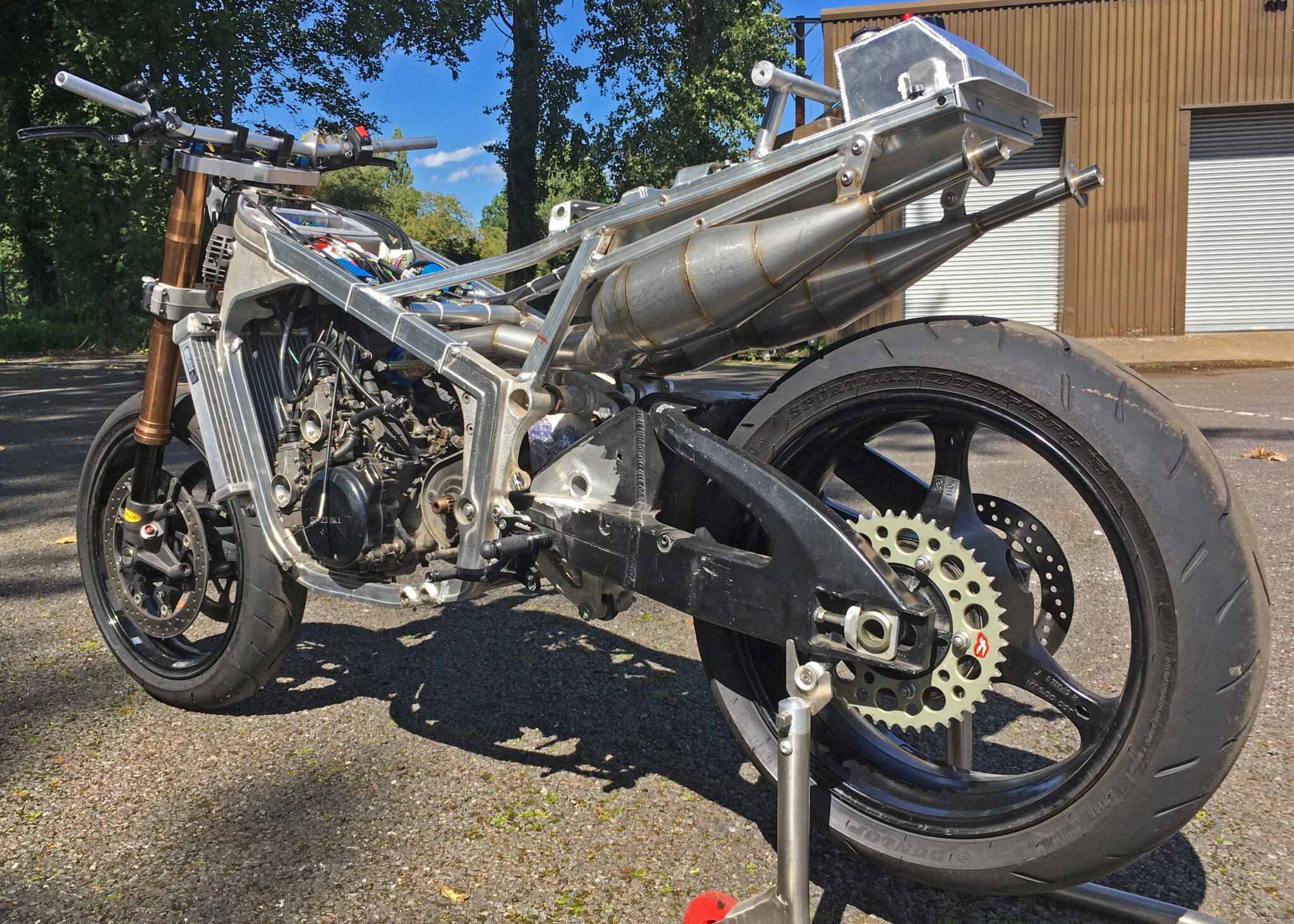 When it’s finished it’ll have two more spannies under the engine, and a Sheene-style tail unit 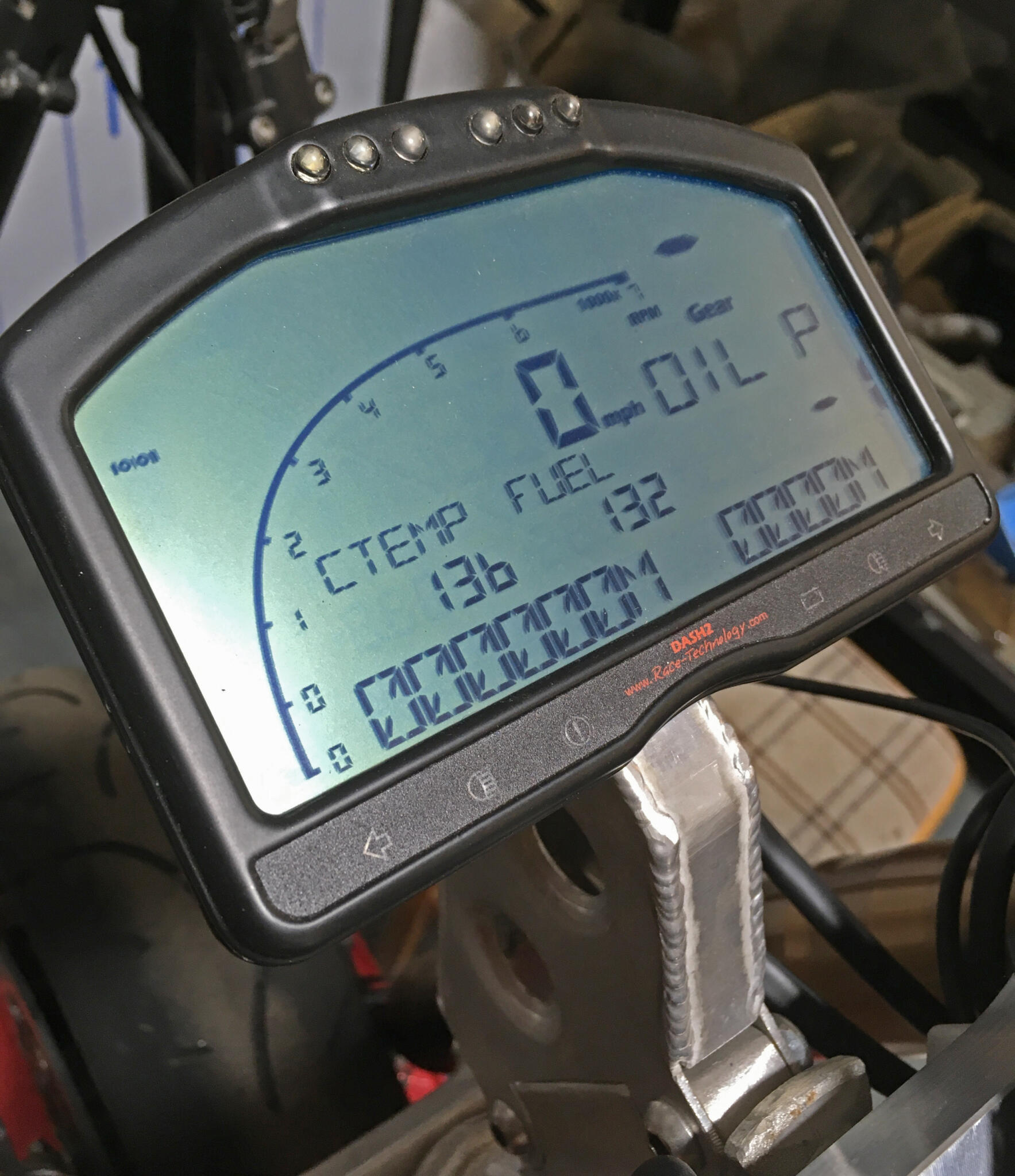 The Dash 2, as it’s called, does just about everything except make the tea 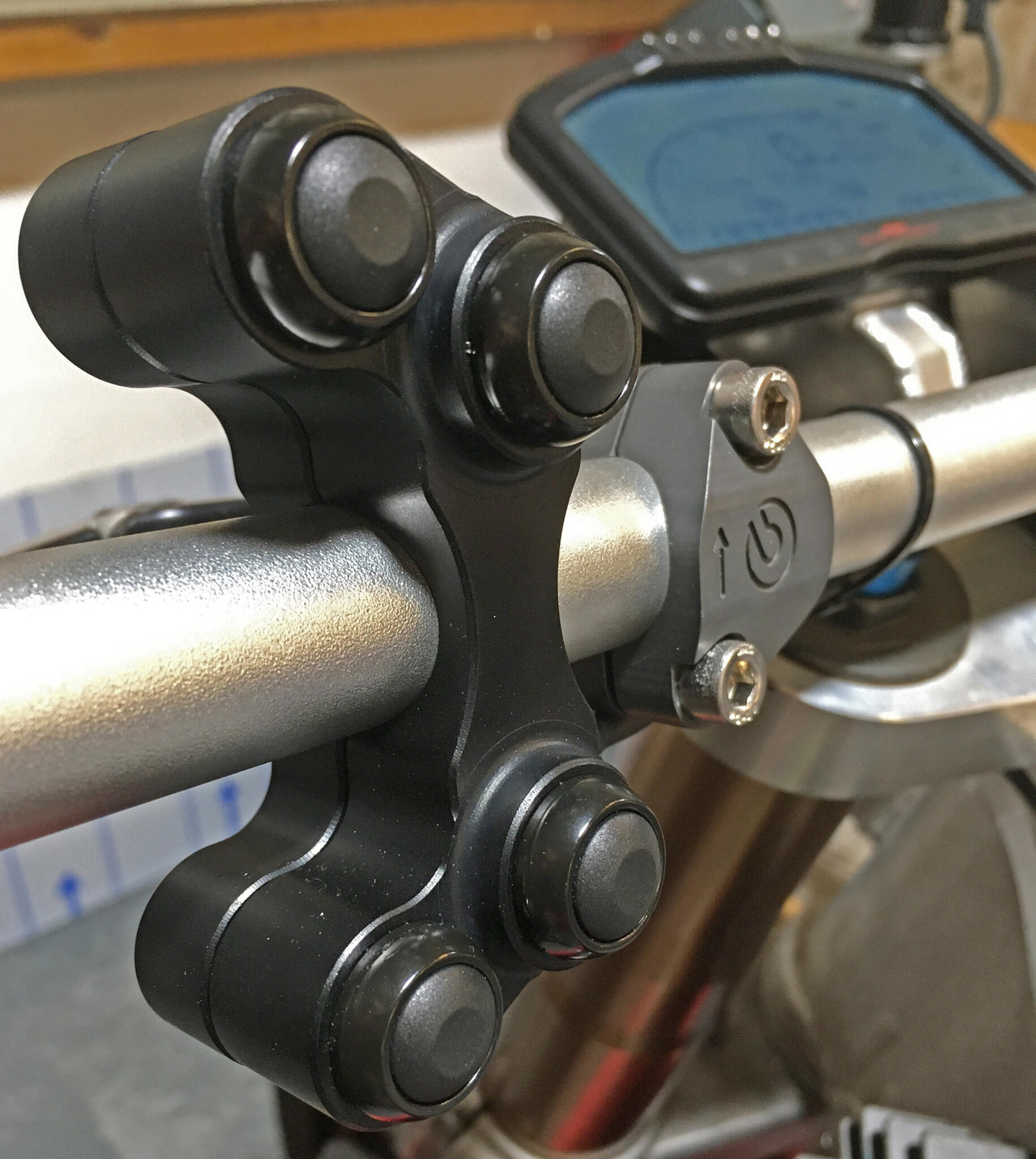 And you find your way around it with these buttons

Back in 1986 the RG500 was a race replica, and (if you squinted) maybe the ultimate performance motorcycle. Today it’s a light, powerful, nostalgic basis for project bikes. Ian’s gone for the naked-with-flat-bars look, and added the front and back end of a GSX-R1000 K5. The considerable fabrication effort it takes to do such things came from Ian Davis at ETTO Motorcycles in Notts. ETTO Ian is a long time friend of Rupe’s Rewires, and he dropped the bike off chuckling with amusement as he always does.

Although owner Ian only wanted a daylight MOT, the wiring was quite a big deal – due mainly to the Race Technology dash which is a racing car system. Cars can afford to have wires sprawling everywhere, but bikes can’t. One way to reduce the clutter was to replace the four separate buttons that control the dash with a single handlebar switch cluster. The obvious place to get that was Bike Sport Developments who can make any kind of push-button switch, in several colours, and engraved if you like. Ian went for all black. Annoyingly, the dash can’t display a neutral light. Instead it works out the gears (from road speed and rpm), and displays a zero when the engine is running and the bike isn’t moving.

The bike already had a lithium battery, in a beautifully crafted ETTO battery box. Now the longer I do this job the more suspicious of lithiums I become. I have discovered that even the best ones (with built-in safety circuits) can melt, and give off very dangerous gases, if they are continuously overcharged (ie more than 14.4V). Likewise if the regulator rectifier blows a diode. A MOSFET reg rec gives a smoother voltage control than the RG’s original shunt technology, so I recommended Ian get one. It felt weird drilling the frame to mount it, but it had to go somewhere.

Next stop, after it goes back to ETTO for some more fabrication work, is an engine rebuild. I wonder what air filters it will have on those sideways carbs? 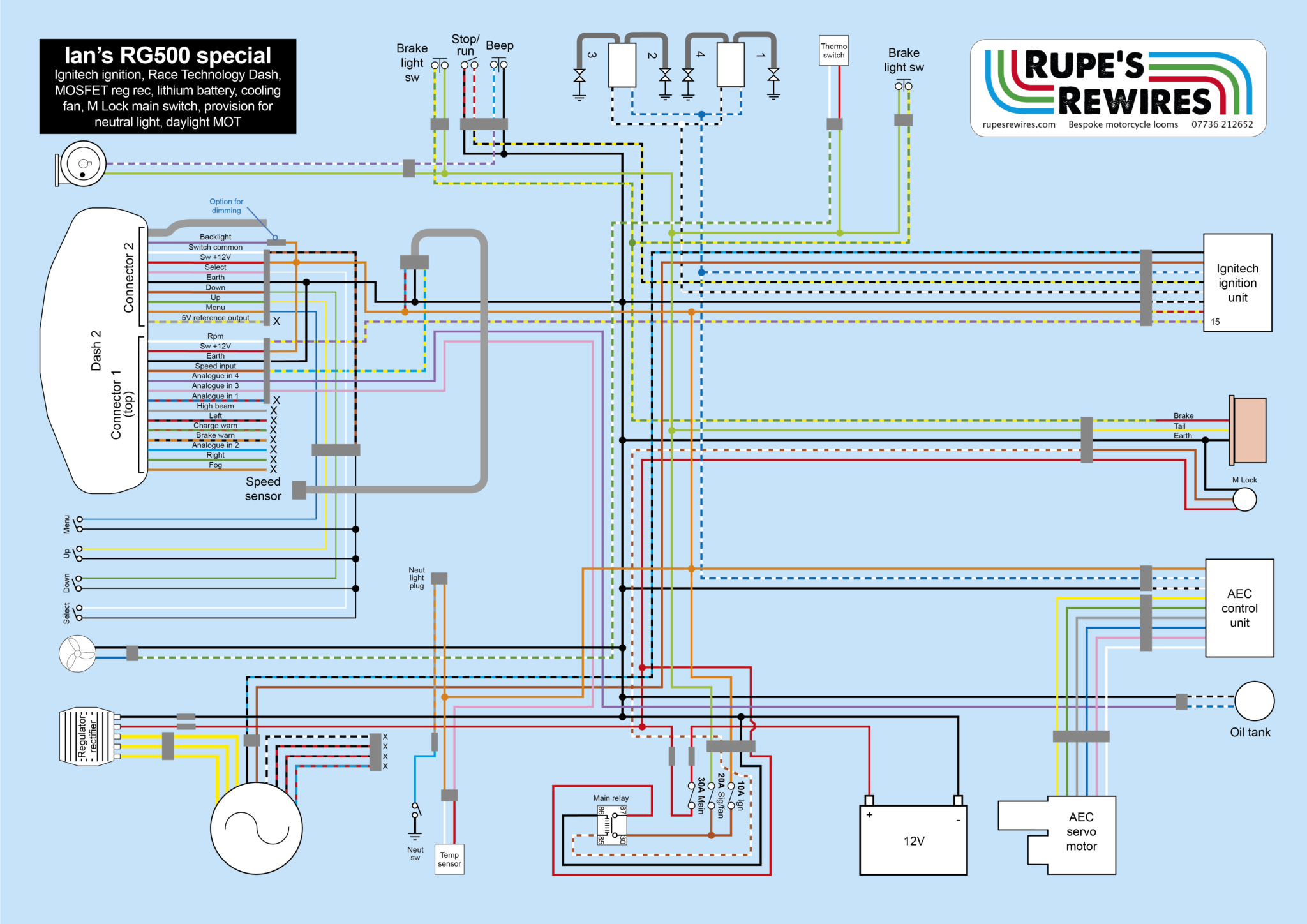 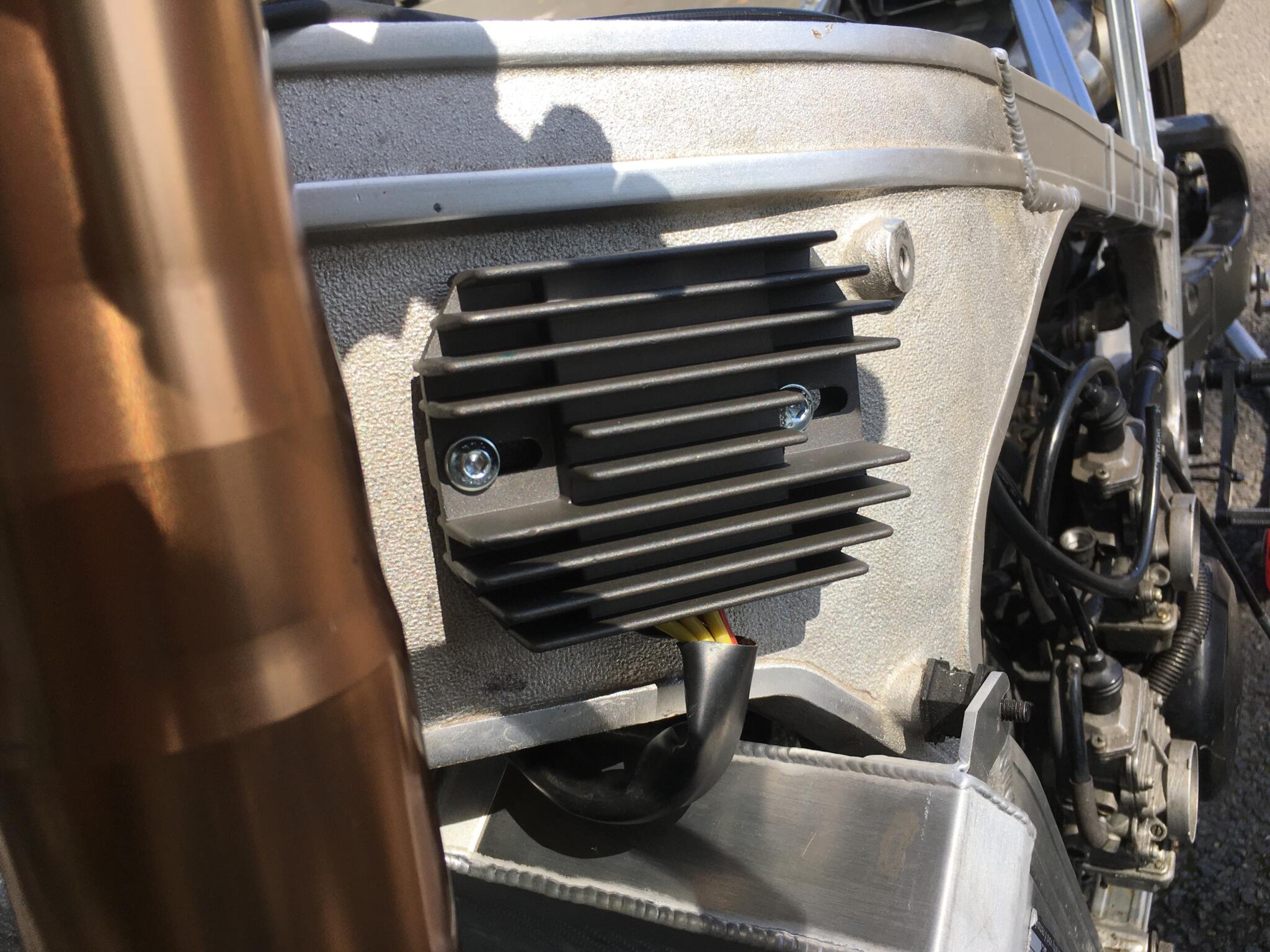 It’s got a lithium battery, so a MOSFET regulator rectifier is a very good idea. This is the only place it could go 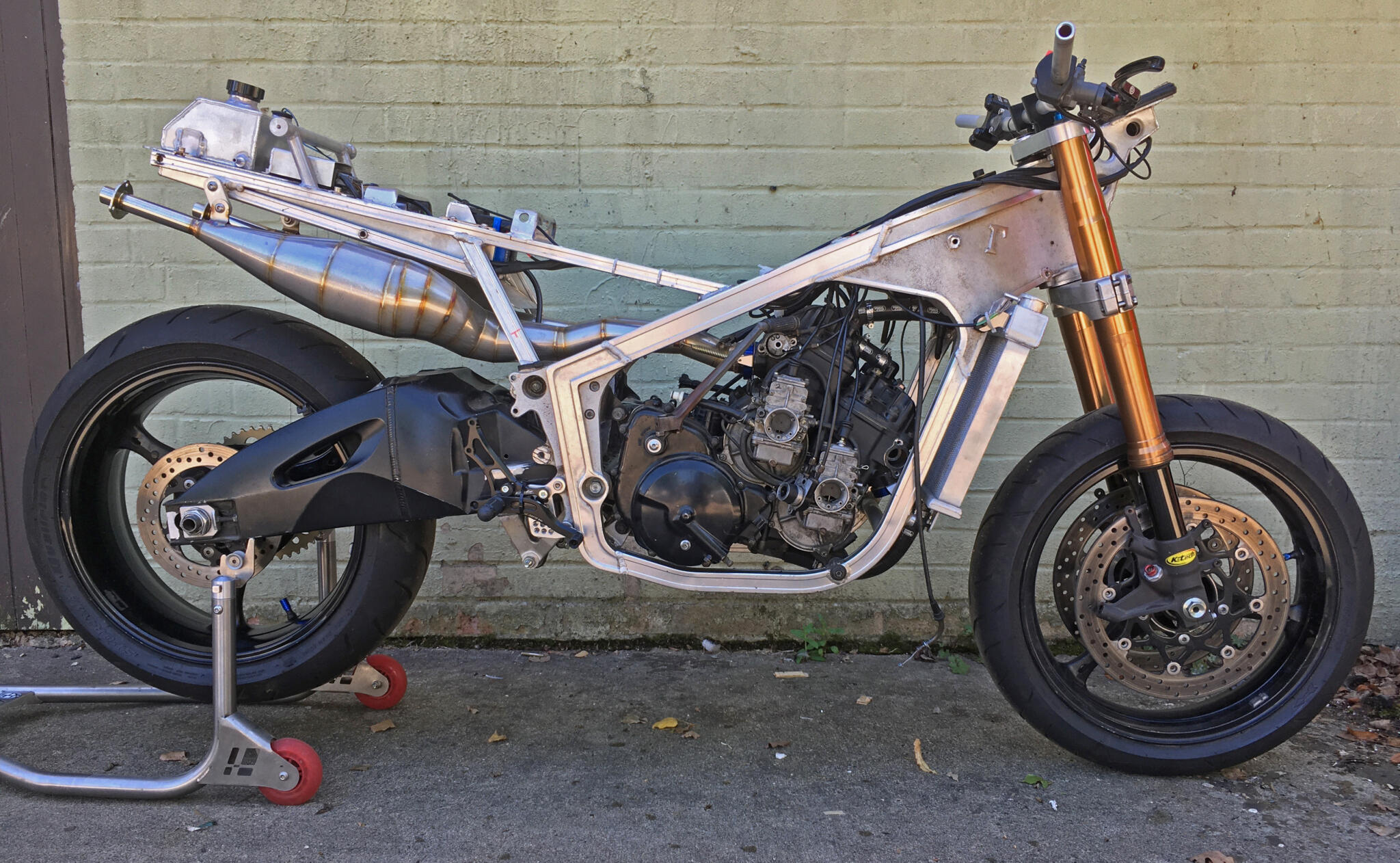 Still a way to go: engine rebuild, paintwork, seat, tidying up various bits. But it is going to be nuts.