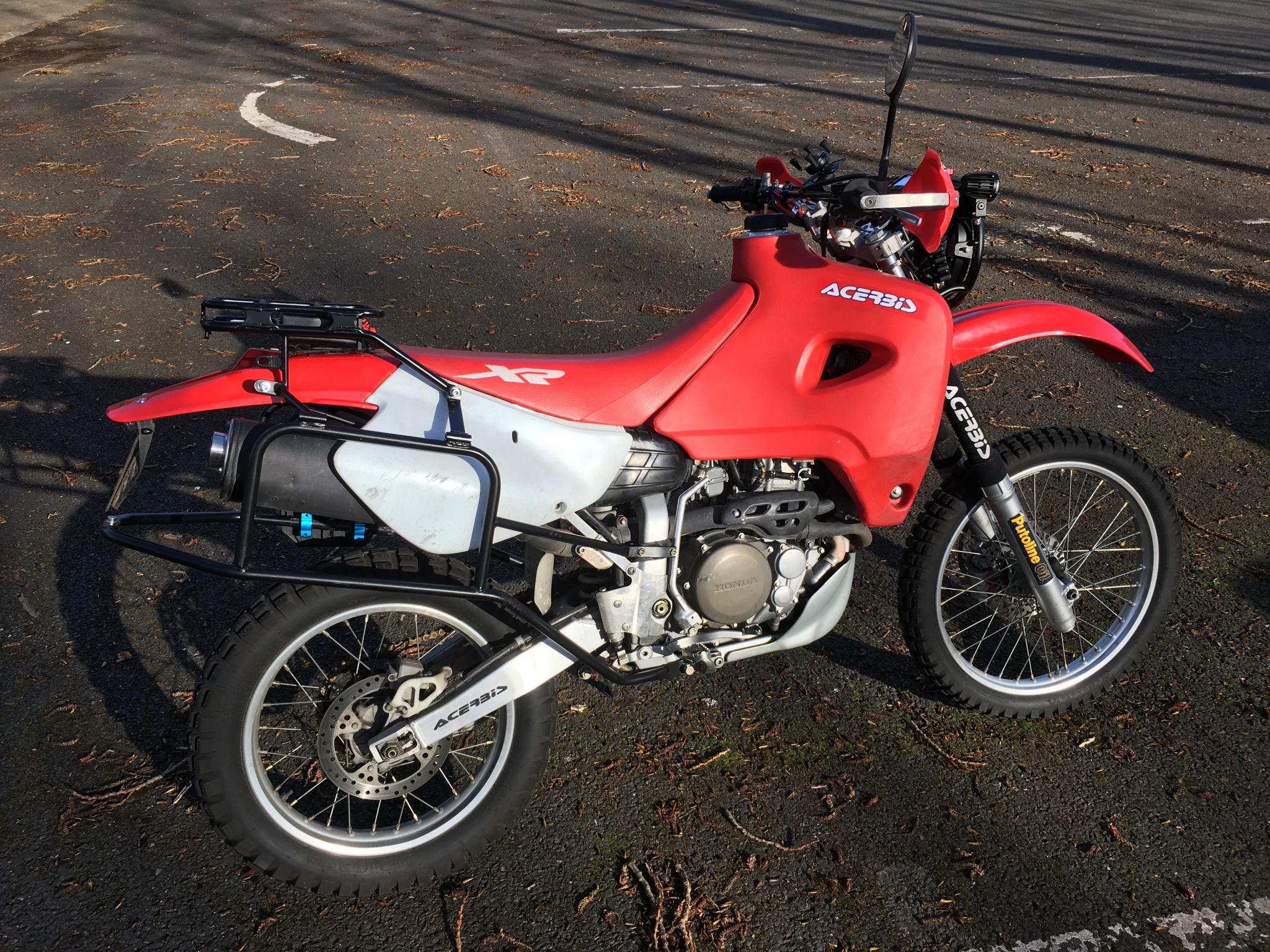 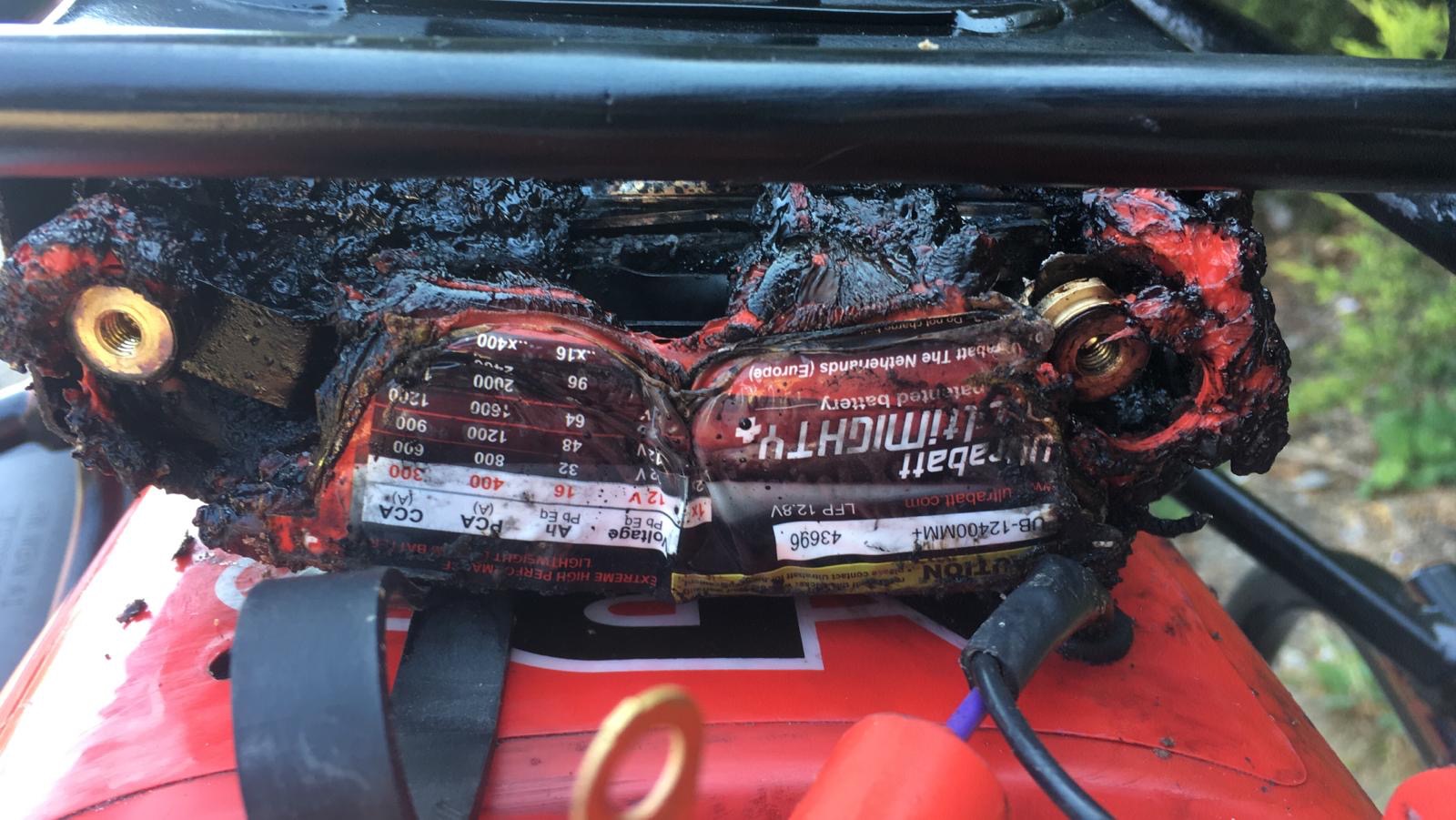 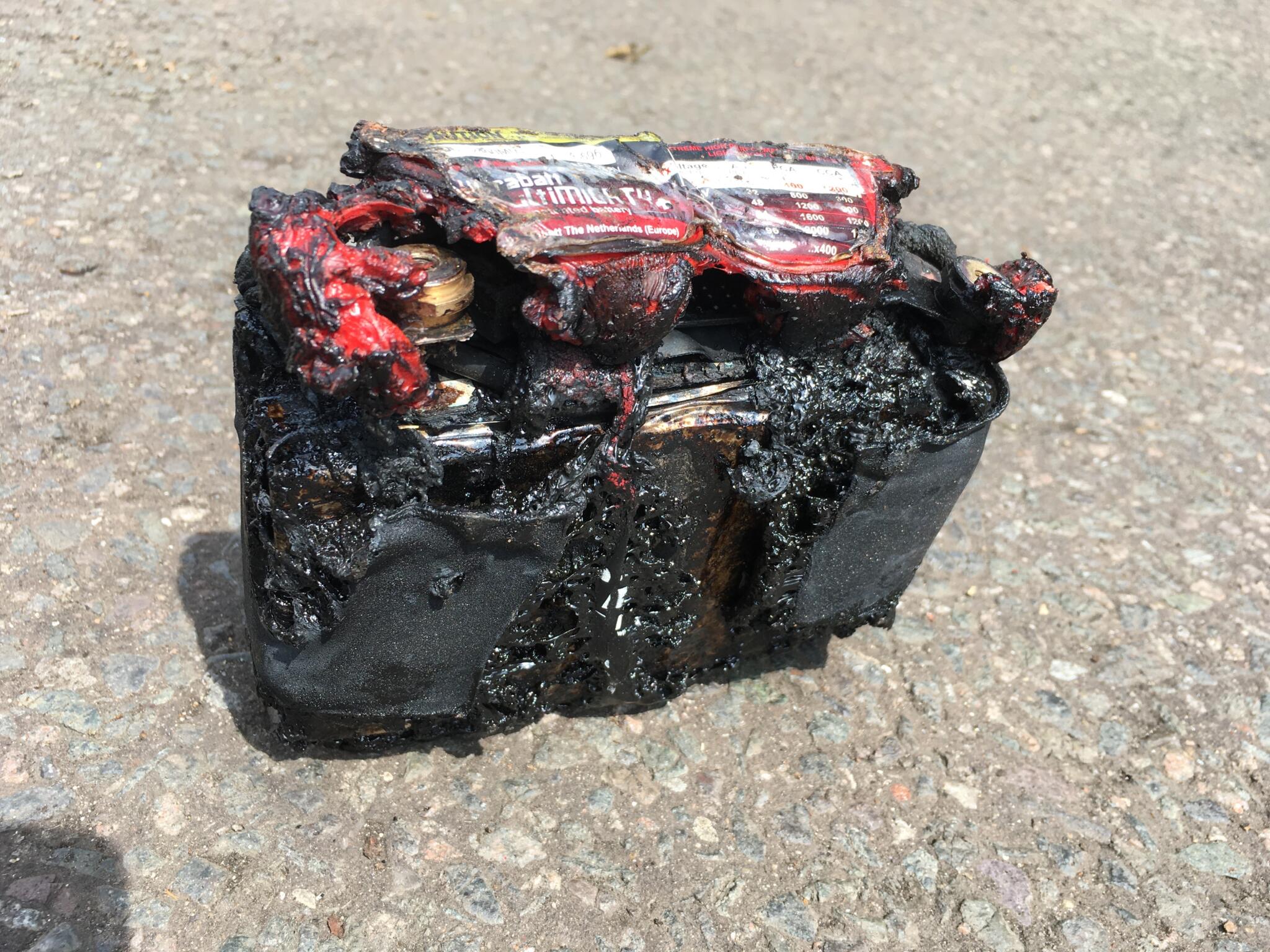 Eventually it cooled down. Still stank though…

Sometimes things don’t go to plan. Like the time Sean, whose round-the-world Honda XR650 enduro was completed just before the lockdown, rang and said: “My battery is melting.”

Fortunately his Ultrabatt lithium ion battery didn’t catch fire, but it certainly had a violent argument with itself. I got the bike picked up and had a look. The loom was completely untouched – even the main feed and earth were still perfect. Clearly the battery had suffered a catastrophic internal short, despite its safety circuits which Ultrabatt say will protect it from most charging problems.

It turned out that one of the diodes on the regulator rectifier had blown. That is the sort of thing that will just quietly kill a gel battery, but a lithium failure is a bit more serious. Quite apart from the fire risk the smell was terrible, and the melted residue was so stubborn I had to blast and powder coat the rack.

Now you might ask why the battery is mounted on the rack. Sean’s bike is a proper enduro racer, so there is no space whatsoever on (or in) the main part of the bike. Even the regulator rectifier only just fitted, in a tiny gap under the seat. But it was an inexpensive shunt-type regulator, and I didn’t fancy using one of those again in this situation. Sean had originally wanted a MOSFET type reg rec fitting (it has a smoother voltage control, and costs a lot more money than a shunt type) but I had decided we couldn’t use it because there was no space. It’s a big, bulky thing.

But it’s amazing how a meltdown can focus your mind. There was a place for the MOSFET to fit after all: behind the battery. OK, it looks odd, and its cables are a bit more vulnerable than usual, but it’s a much better quality regulator, and it gets plenty of cooling air in that position. So that’s how it ended up.

Sean is fine with taking care of the cables when attaching luggage. He still hopes to use the bike for a bit of intercontinental travel when things have quietened down a bit. 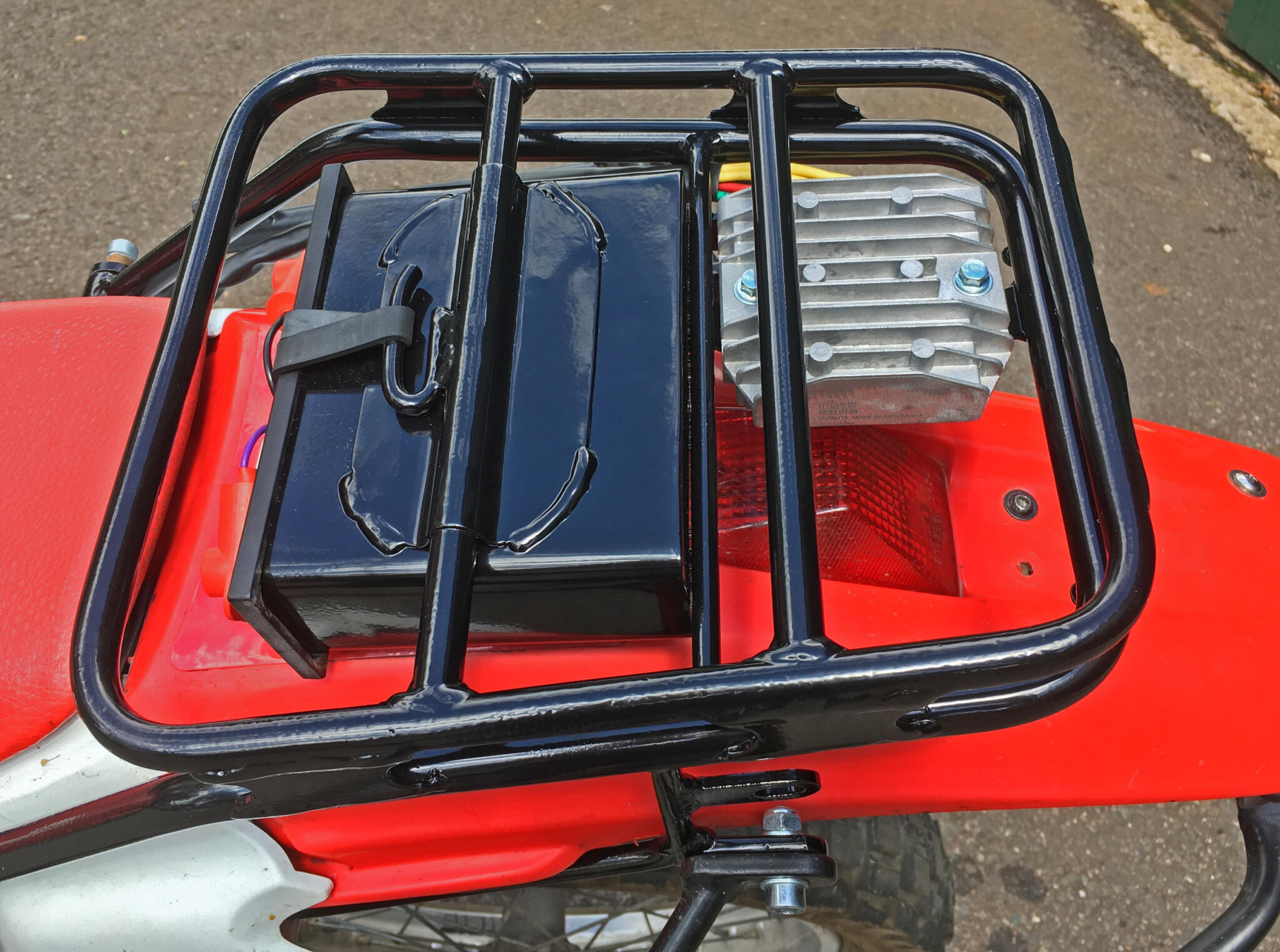 The solution: refinished rack, new battery and a MOSFET regulator rectifier mounted in the only place it would fit 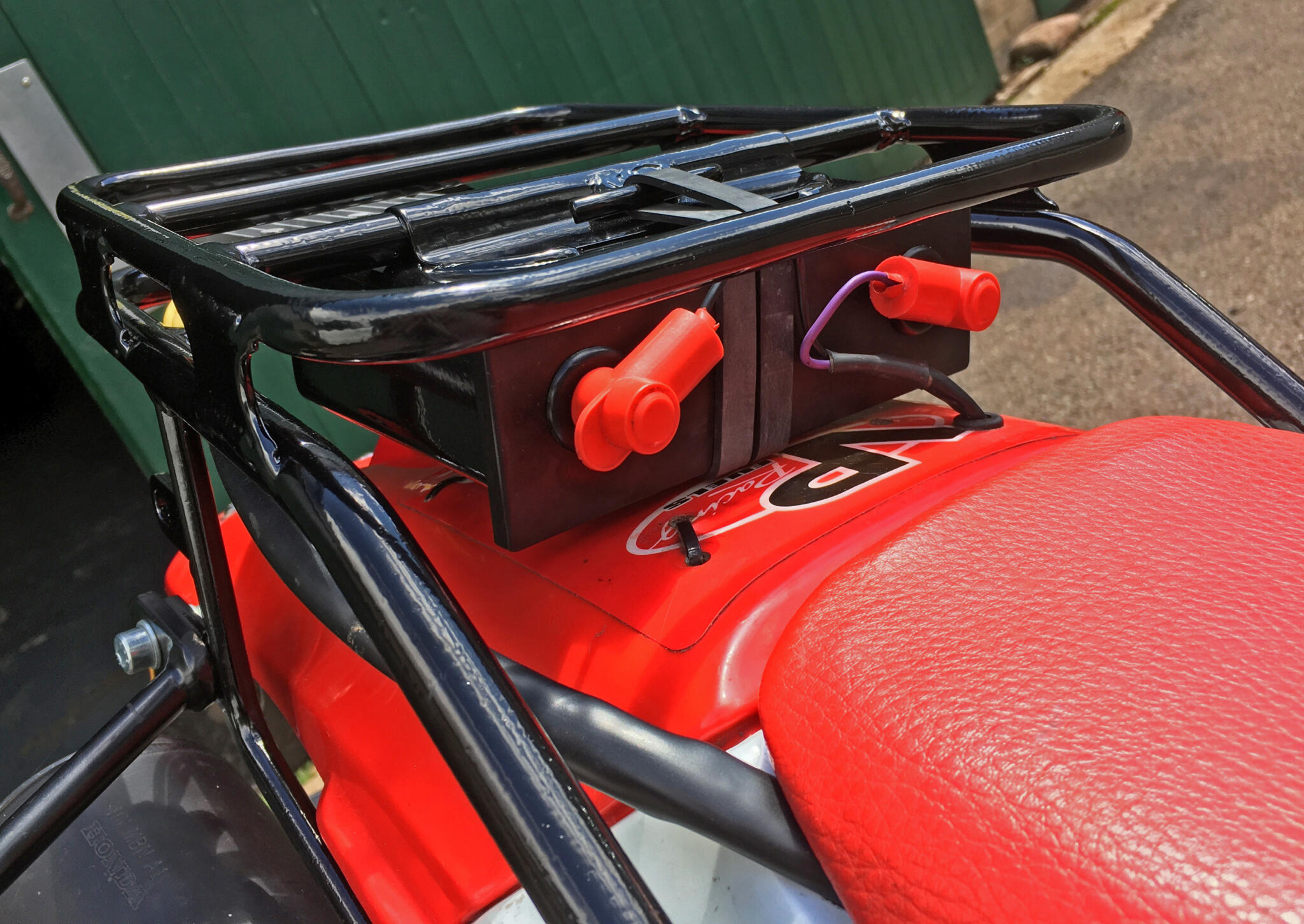 The aftermarket alternator is a single phase one, which is still not ideal according to the battery instructions (Ultrabatt recommend three phase). But it’s working