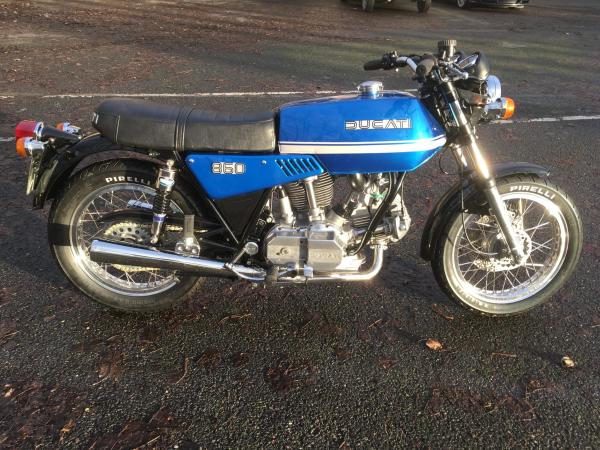 In 1975 this look was wildly futuristic. In 2020 it’s a much nicer riding position than the more famous 900SS 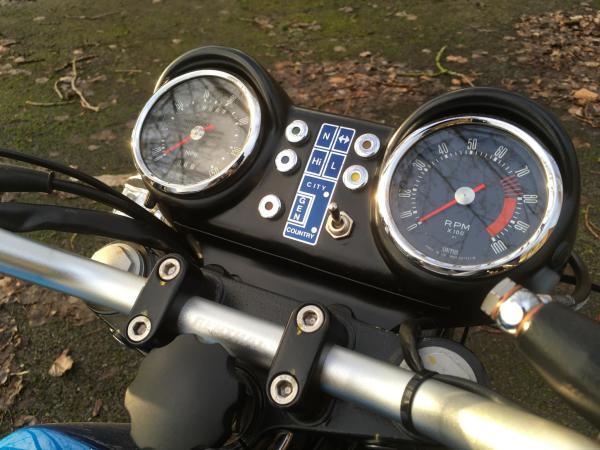 Usual warning lights, plus the toggle switch for the City/Country horn settings. You flick it up as you come into a 30mph limit and the horn goes (very slightly) quieter 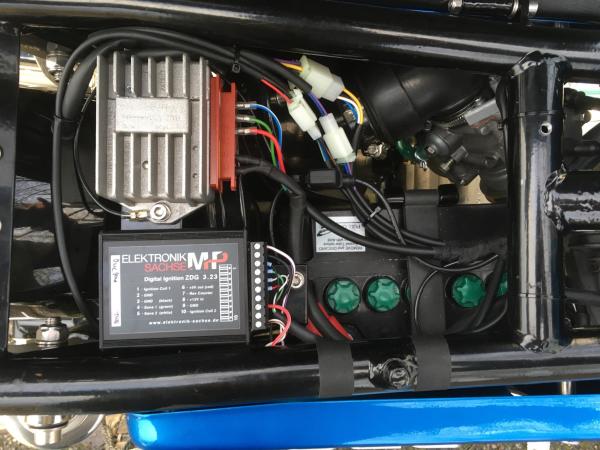 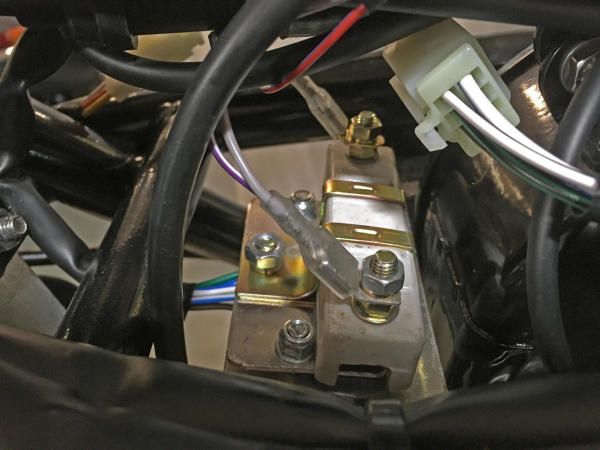 Under the tank and above the fuse box is the modified resistor that makes the horn a bit quieter. The original resistor assembly lived in the headlight but you can’t get that any more 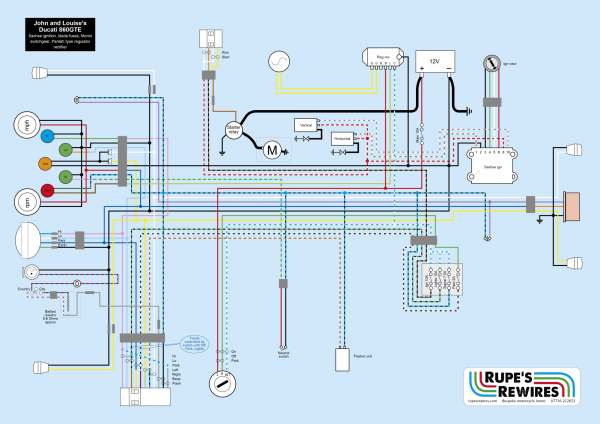 I’m not doing any of my other customers a disservice when I say this old bevel Ducati is the best-built bike I’ve worked on in 2019. It’s been a labour of love for owners John and Louise, who bought it in boxes and transformed it into this delicious chunk of Italian history.

It’s got a few differences from original spec: the ugly electric start casing on the left of the engine has been replaced by the kickstart version (though all the internals and electrics are there to reverse the conversion). The bars are Renthal, the headlight is pattern (John’s since found an original), the ignition is a German Sachse system with ten map options, the new switchgear is 1970s Morini, and of course the loom is an RR one-off. You can’t find an original loom for love or money, and anyway John and Louise were more interested in reliability than originality.

A custom loom means you can abolish the original earth-through-the-frame system and instead build in the best possible earth paths. I also added a blade fuse box with several fuses, rather than a single glass fuse. But the City/Country horn switch next to the ignition switch was a puzzler. Ducati’s idea in 1975 was to muffle the horn in town to avoid frightening the horses, or something. Trying to make it work in the 21st century was easier said than done. The excellent DucatiPaddy dug out a 40 year-old original resistor coil and capacitor, but it was so old it muted the horn to a feeble ‘ponk’ noise. So did most of the options I tried. Finally I fitted a classic car ignition ballast resistor. That went ‘ponk’ too, but I could cut down the resistor wire until the horn just worked. Even then the difference between ‘quiet’ and ‘loud’ is not much. Only the Italians could invest that much complexity in a horn.

The Sachse ignition is (fairly) easy to fit to kickstart versions of the 860, but the electric start GTE has a big gear wheel on the left side of the crank, and it completely covers the ignition triggers and slotted adjusters. You need to fish the gear wheel off, make up three spacers to take its place, fit the trigger wheel and circuit board, set the timing, make damn sure you’re right, then refit the gear, bolt the whole thing up properly, refit the cover, fill with oil and fire her up. Which, as it happened, was second kick.

John and Louise could hardly believe the bike they’d spent so much time and money on was finally running. “We are incredibly happy and very grateful. We’ve had the wiring loom printed 20 x 16 inches and had it framed so it’s on the wall. Again a big, big thanks for your work which is more like art because of the attention to detail.”

You can’t get original 860GTE switchgear, but this brand new 1970s Morini cluster is the best alternative 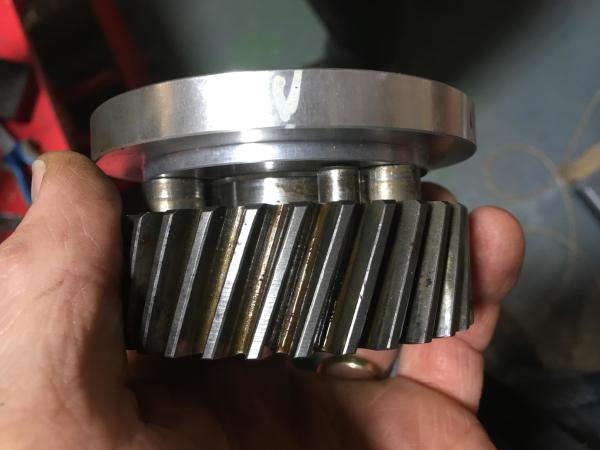 The dull grey bits between the ignition trigger wheel and the primary gear are temporary spacers to take the place of the electric start gear during ignition set-up. They’re made from E-Type Jag valve guides 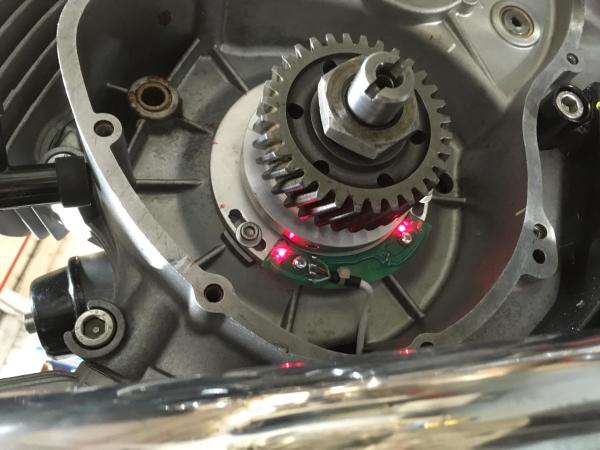 And here are the Sachse ignition trigger lights. Once the gear wheel is back in place there’s no way you can reach the timing adjuster screws 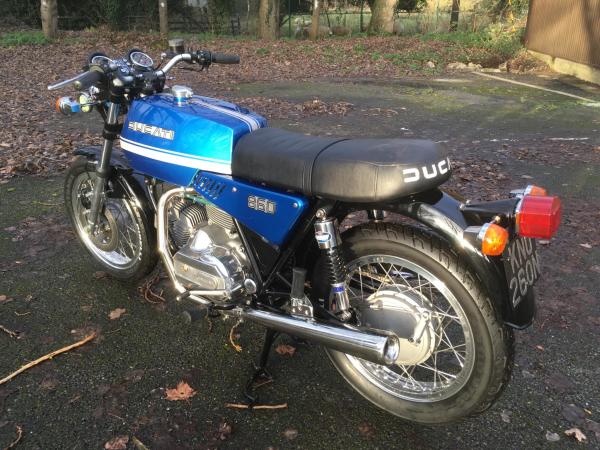 Every bit of this bike is immaculate