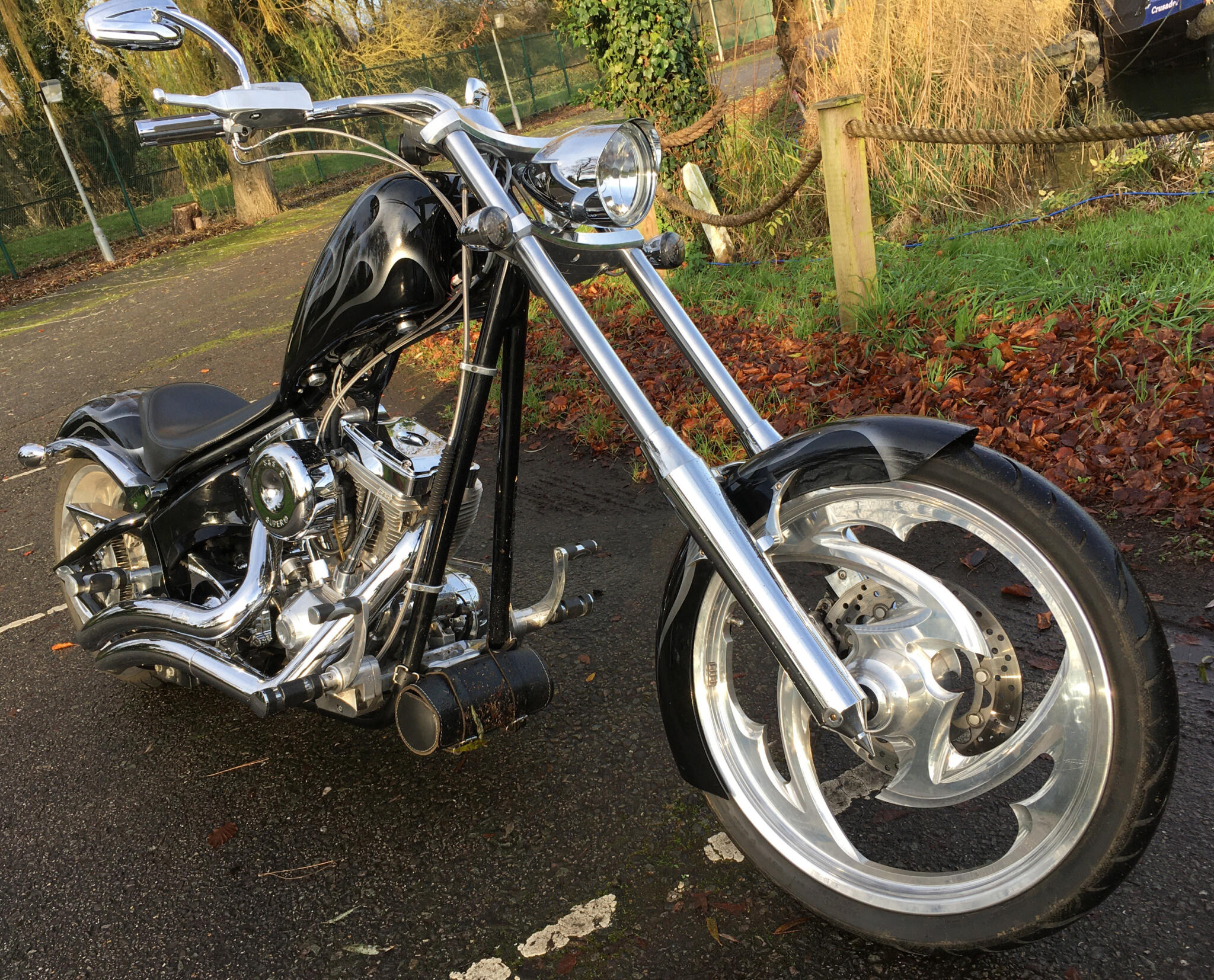 If this looks like a Harley to you, you’re not paying attention 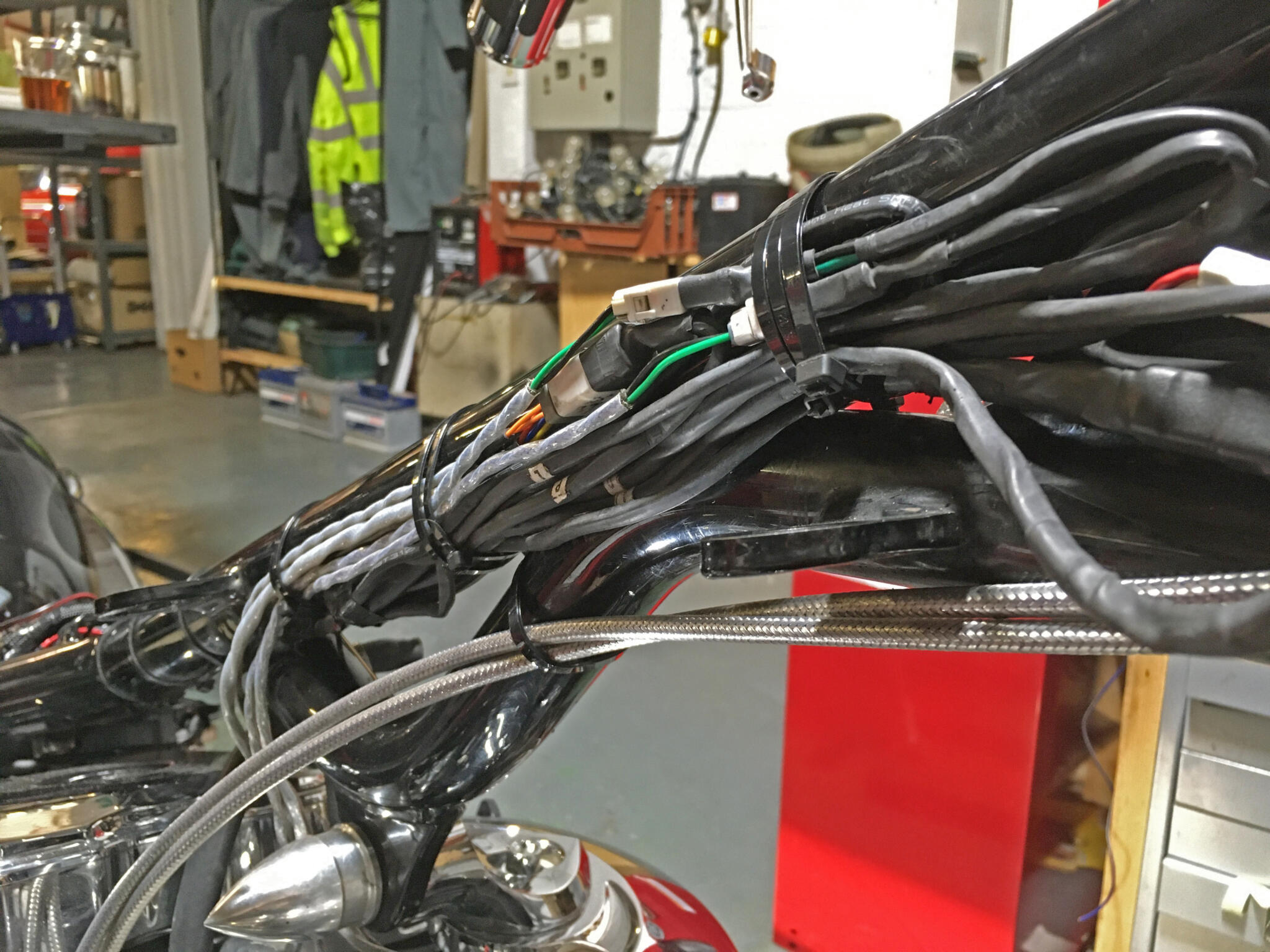 A Big Dog’s harness has no proper place to live, so it has to be stuffed along the top frame tube… 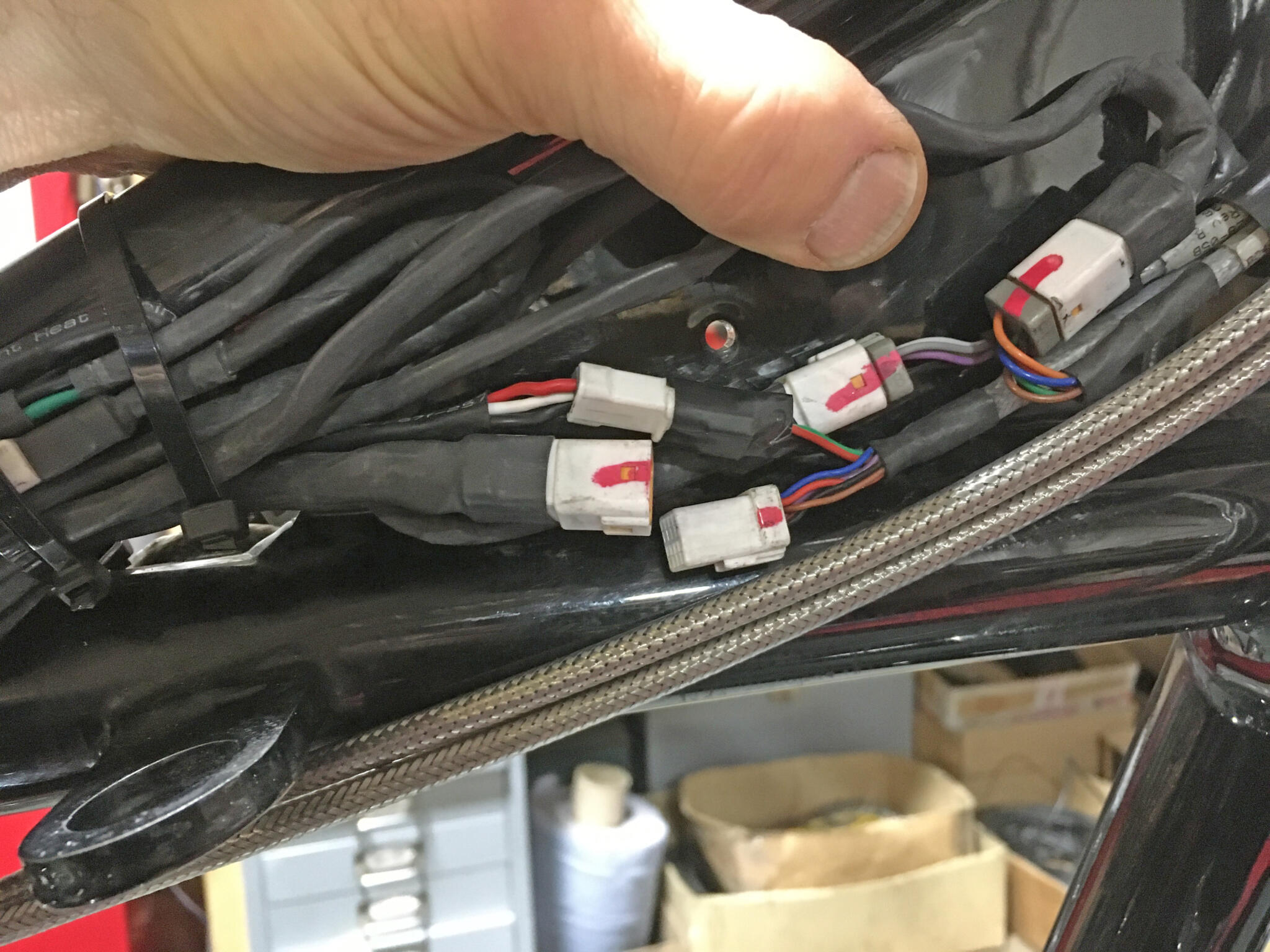 …which causes problems. This pair of JST connector blocks had pulled apart under the tension created by a neighbouring harness branch. Hence no speedo function 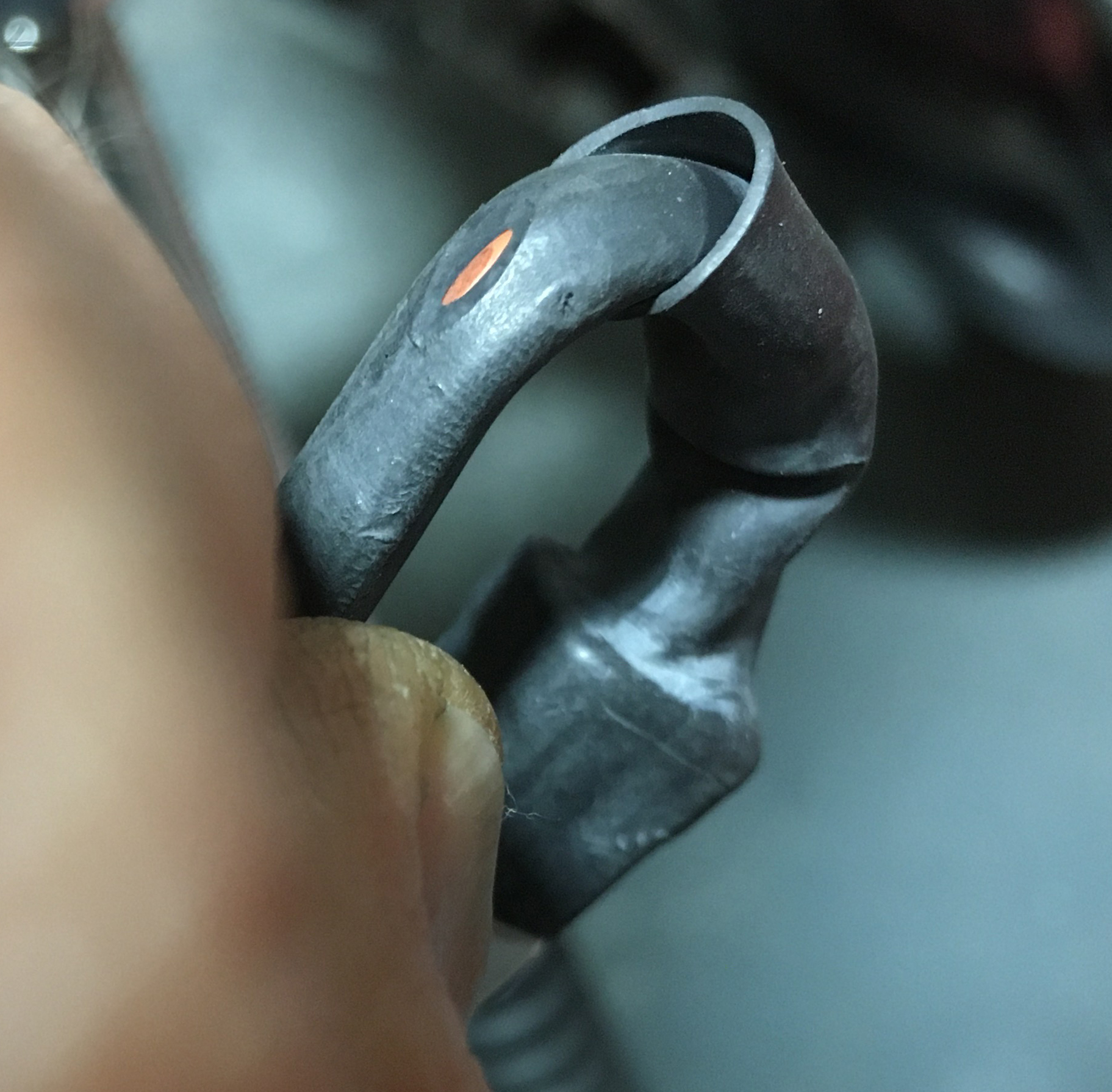 Big vibes and small spaces mean chafing is an issue too

Big Dog are a custom bike company in the USA with a dedicated band of followers. The idea is to take an S&S V-twin engine and surround it with what owner Mac describes as, “pure art”. It’s a bit like a Harley on steroids, with a simply stupendous engine.

But on Mac’s bike the speedo had stopped working and the brake lights occasionally stuck on. In exasperation he’d brought it 90 miles north to the RR workshop, hoping I could fix it.

On a normal bike a sticking brake light is bound to be the switch, but Big Dog do things rather differently. The whole bike uses a power distribution unit which works on inputs from the switchgear, and then outputs the relevant current to turn on the brake lights or whatever. It’s essentially the same idea as a Motogadget M-Unit, or what you find on recent MV Agustas.

When you have a fault that only occurs once in a while, it can even be tricky working out if the problem is on the input or output side. Or in the controller unit. Eventually, with the help of Jeff at Dead One Customs in the USA, I tracked it down to the front brake switch area. (Jeff knows about Big Dogs, and reports that most people in the USA can’t understand their electrical system.)

Big Dog switchgear is amazingly complicated. Start, run/kill and the rest push on clicker buttons in a printed circuit board which features an output plug to the harness. The front brake switch is a sort of cul-de-sac off this: a proximity sensor which works off a magnet in the brake lever. As you squeeze the lever the magnet approaches the sensor, the internal contacts connect, and you get a signal to the power distribution unit. The sensor is an aluminium tube, pushed into a drilling in the switchgear housing. You have to set the distance between it and the magnet to within a sixteenth of an inch, as the brake light just comes on, using a 50 thou Allen key on the grub screw.

The PCB and output wires were damaged, so I replaced the PCB and repaired the wires. The lights still stuck on about one time in 30-50 brake applications. I replaced the sensor. (By good fortune, Mac already had the parts.) Finally the problem went away.

They can’t all be easy, I guess. 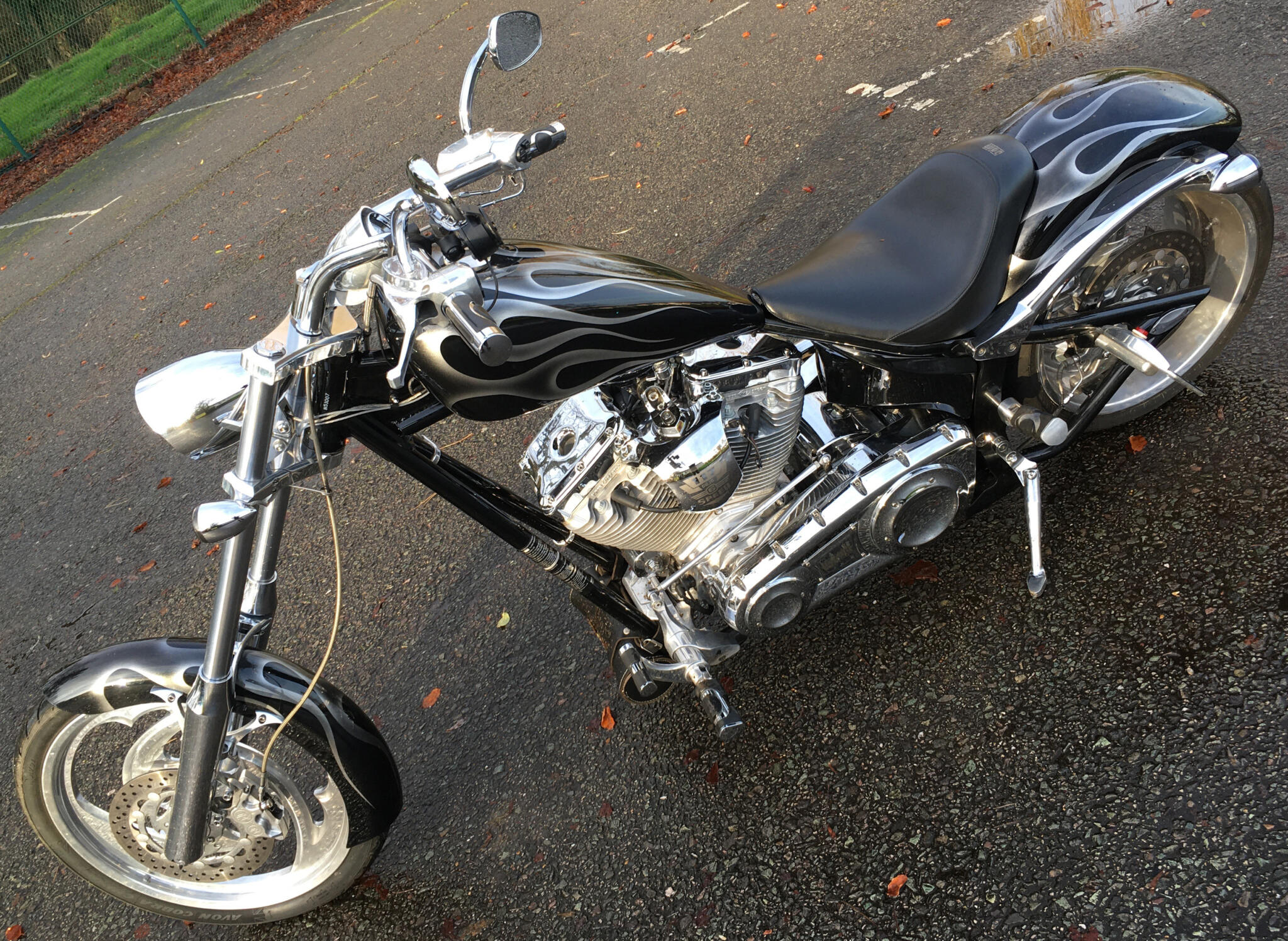 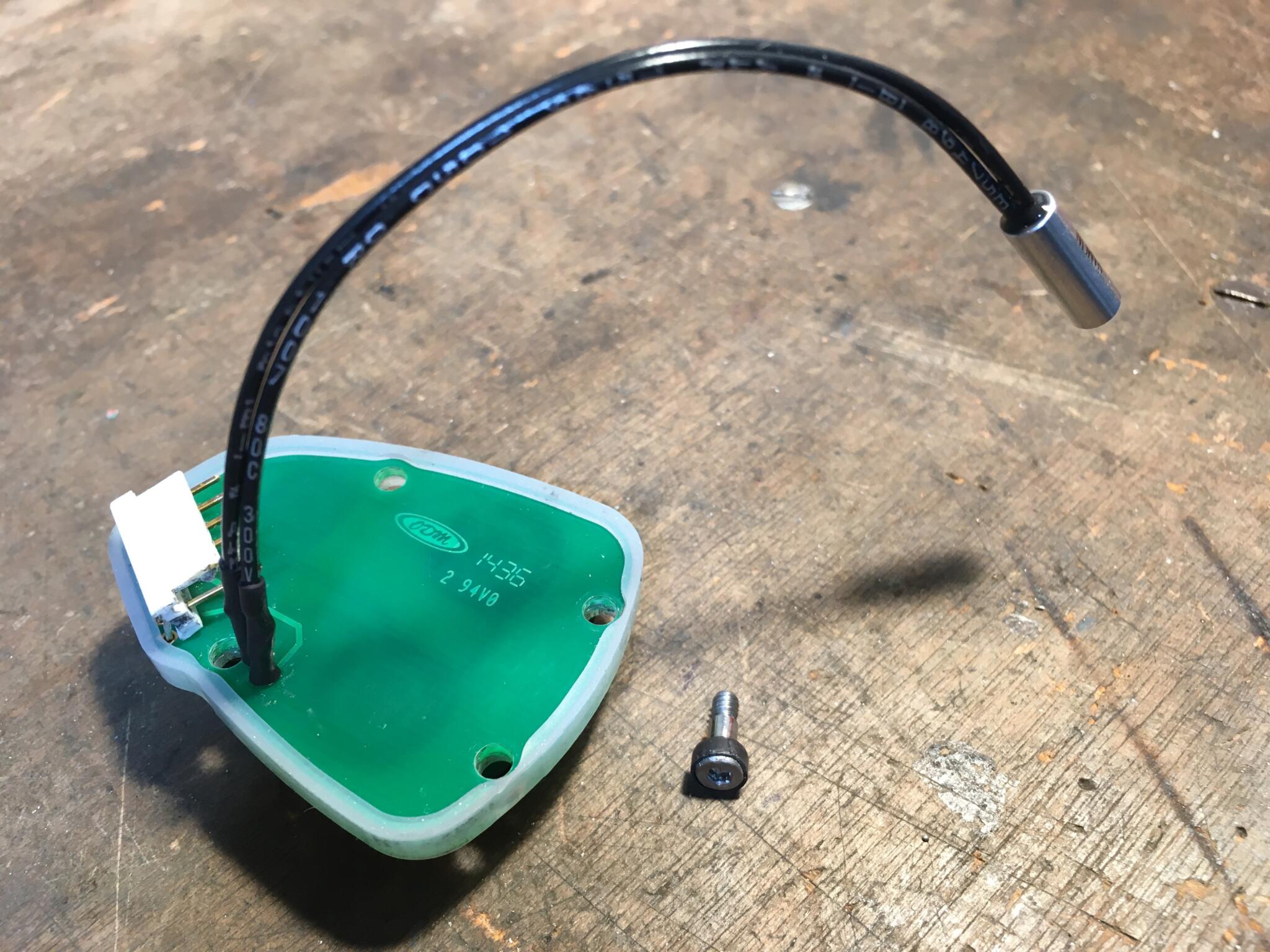 The brake switch sensor, soldered to the printed circuit board that lives inside the switchgear housing 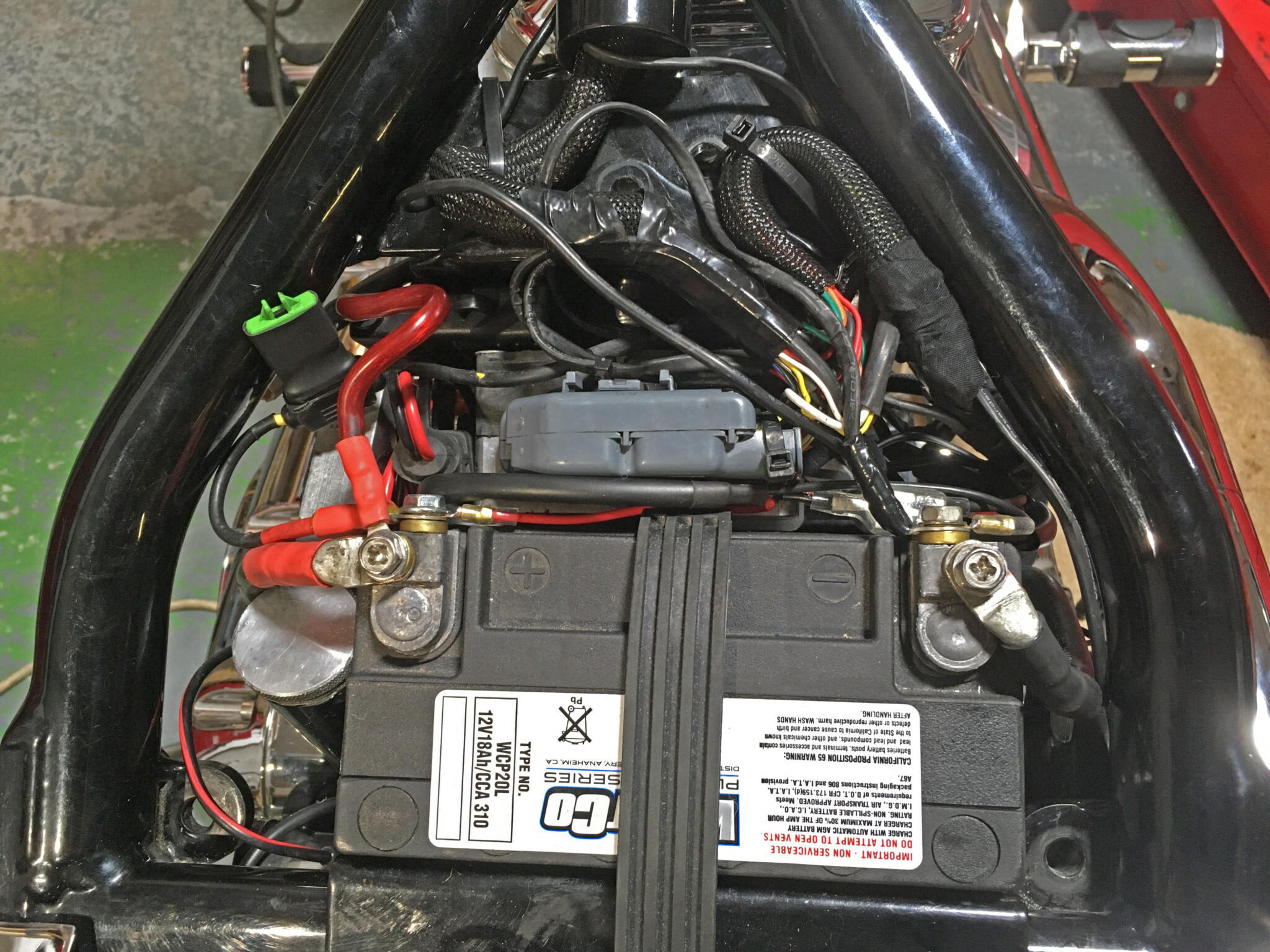 It’s kinda tight round the battery. The power distribution unit lives in front under the big grey plug