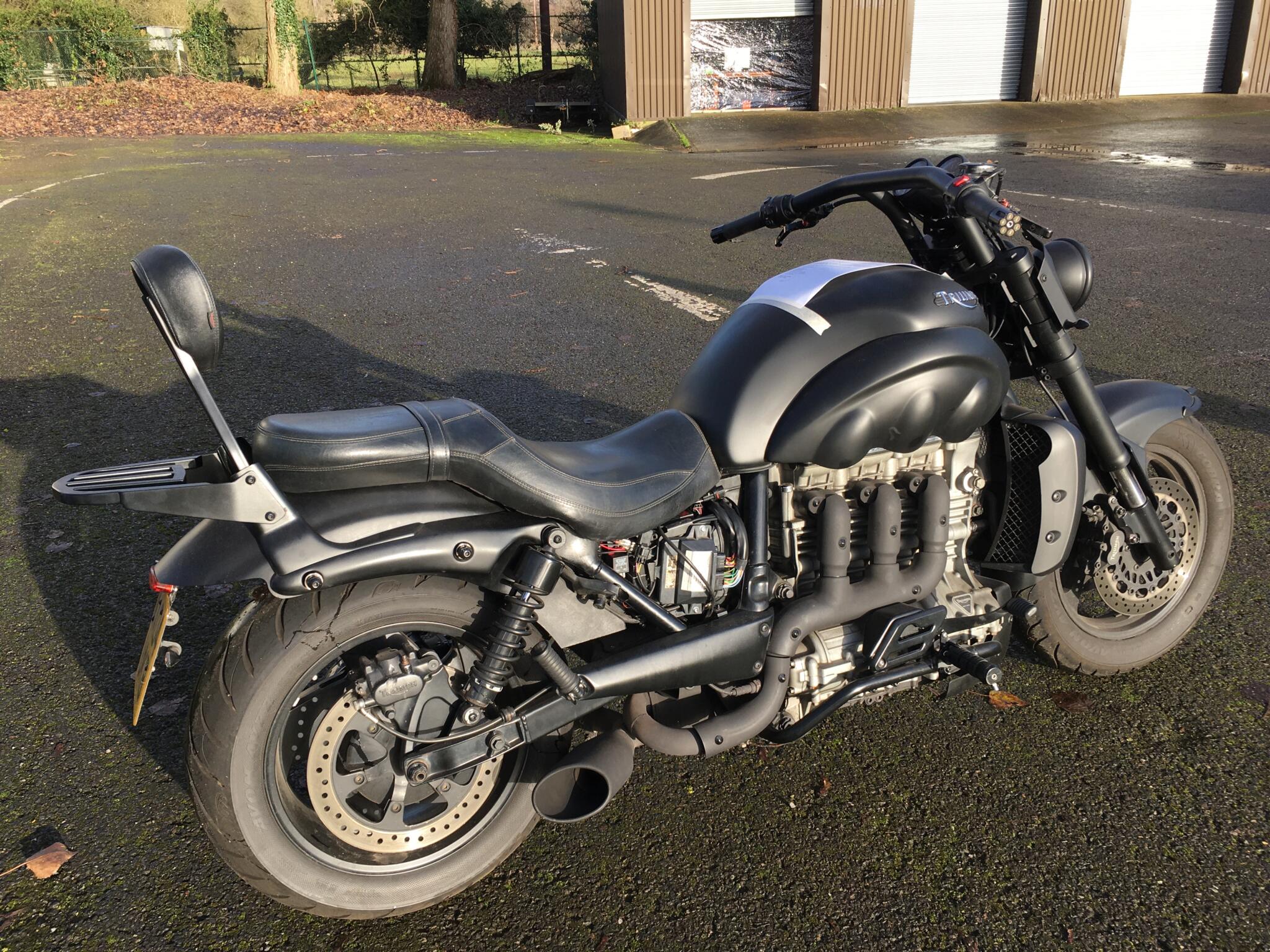 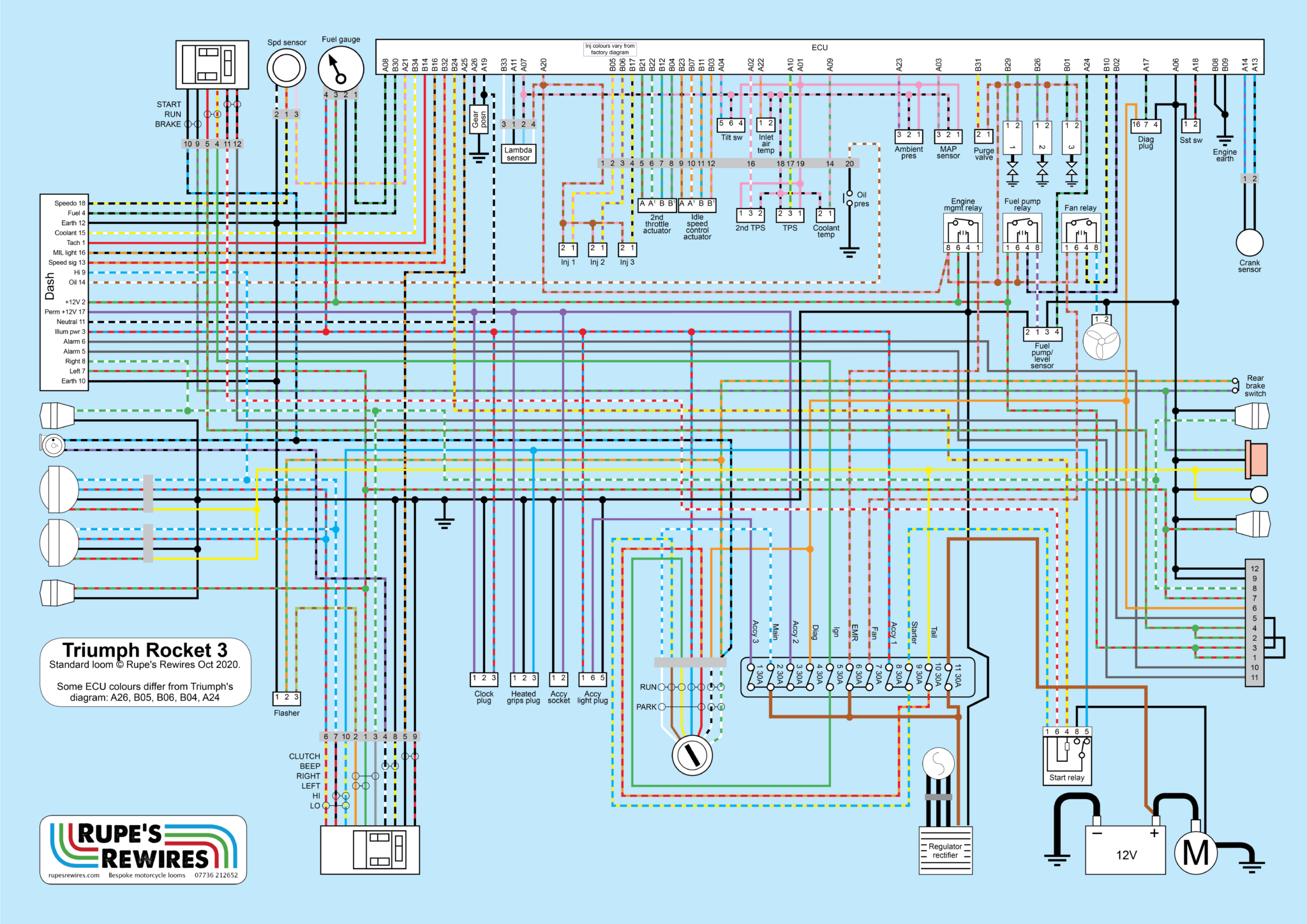 The first stage is to draw a colour wiring diagram of the standard bike. Then (below) you can figure out a custom one 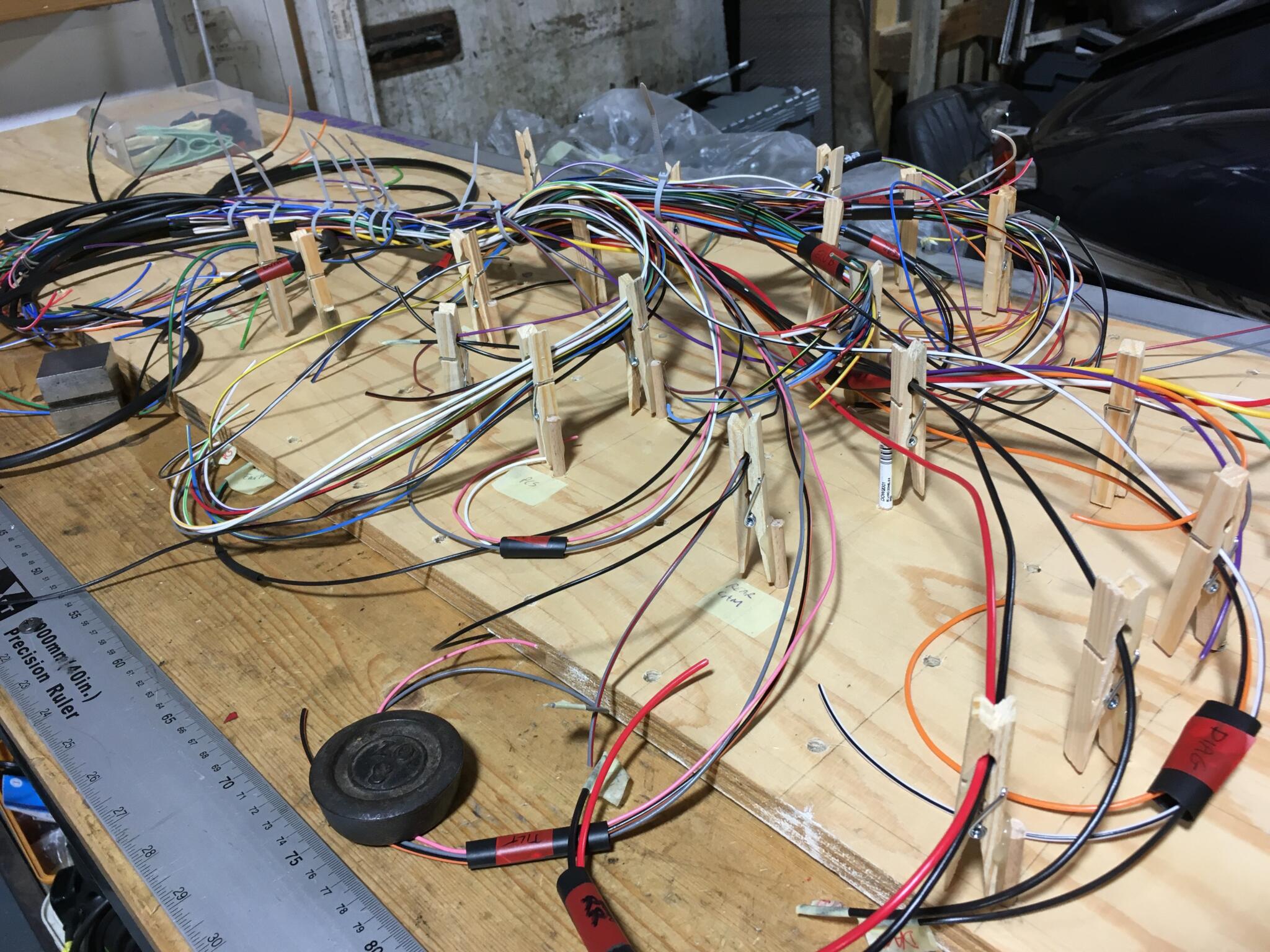 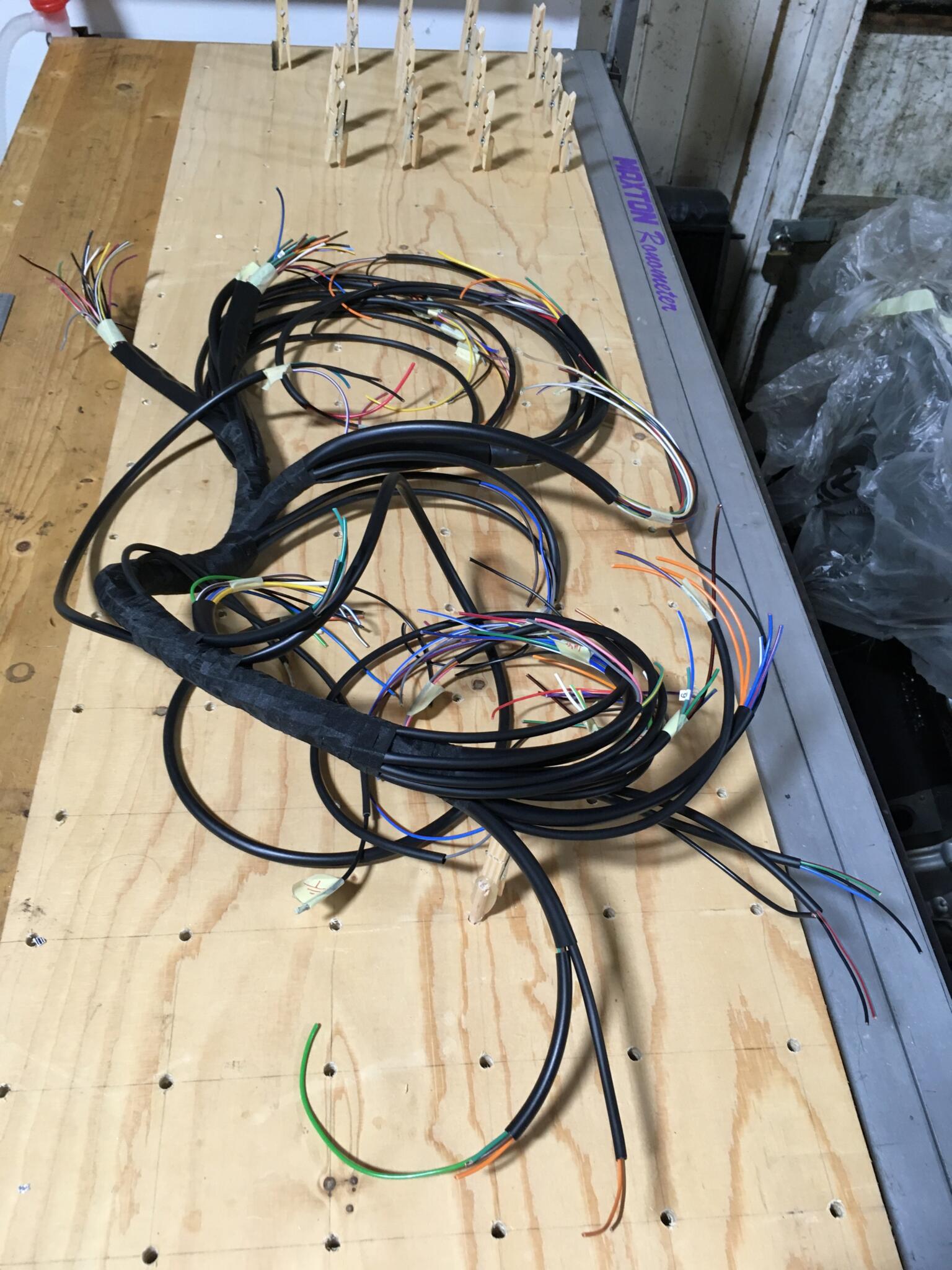 And after a few more fittings, here it is wrapped and sleeved 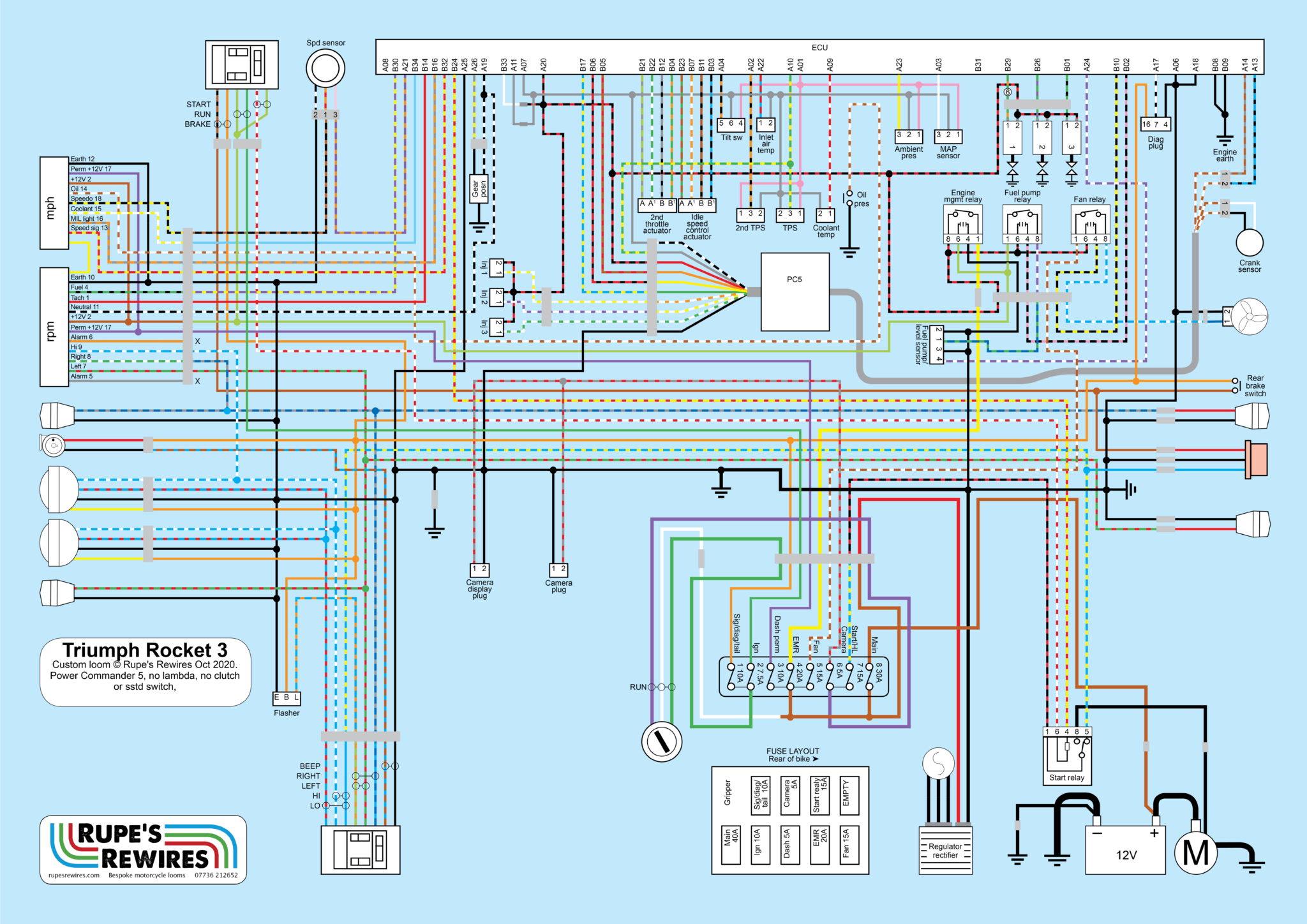 Gary has owned and customised his Rocket 3 for years and has no intention of parting with it. But it was running badly after a throttle position sensor had got knocked. Rather than just get a new one, he decided the first thing to replace was the wiring harness, since many parts of it were getting a bit ragged.

Doing a new loom for a BSA Bantam is easy. Doing one for a 2008 fuel injected bike is anything but. And Triumph’s own wiring diagram is in black and white. So stage one was to draw the diagram in colour, cross-checking it with Gary’s bike. There were a few differences in wire colours, but that’s normal.

Next job was to redesign the diagram to suit Gary’s requirements: no need for a lambda sensor or purge valve, parking light, or heated grips. But he did want a rear-facing camera system with a bar-mounted screen instead of mirrors, plus a Power Commander and non-standard indicators. Gary had also built a second fuel tank, where the airbox used to be, to extend range. It’s connected to the first one by a flexible, armoured rubber hose.

Triumph use custom current rated cable, and custom colours, so you have to adjust for those factors. The plugs are all available from the ever-helpful Kojaycat, but just making a list of what you need is a morning’s work. What I’m trying to say is that even just planning the thing took ages. Building it took even longer.

The bike fired up, but still didn’t run nicely – something Gary had prepared himself for. So the next stop was BSD Performance at Eye Green, just 15 miles up the road.  Run by the massively experienced Mark Brewin, BSD are a dyno house and engineering shop. Mark and Andy diagnosed a weak fuel pump and a couple of sensor problems, reset the throttle position sensor, and set up the Power Commander.

Gary has a few jobs to complete on the bike before it hits the road again in 2021. It’s an incredible machine: like a normal Rocket 3 but blacker and louder. 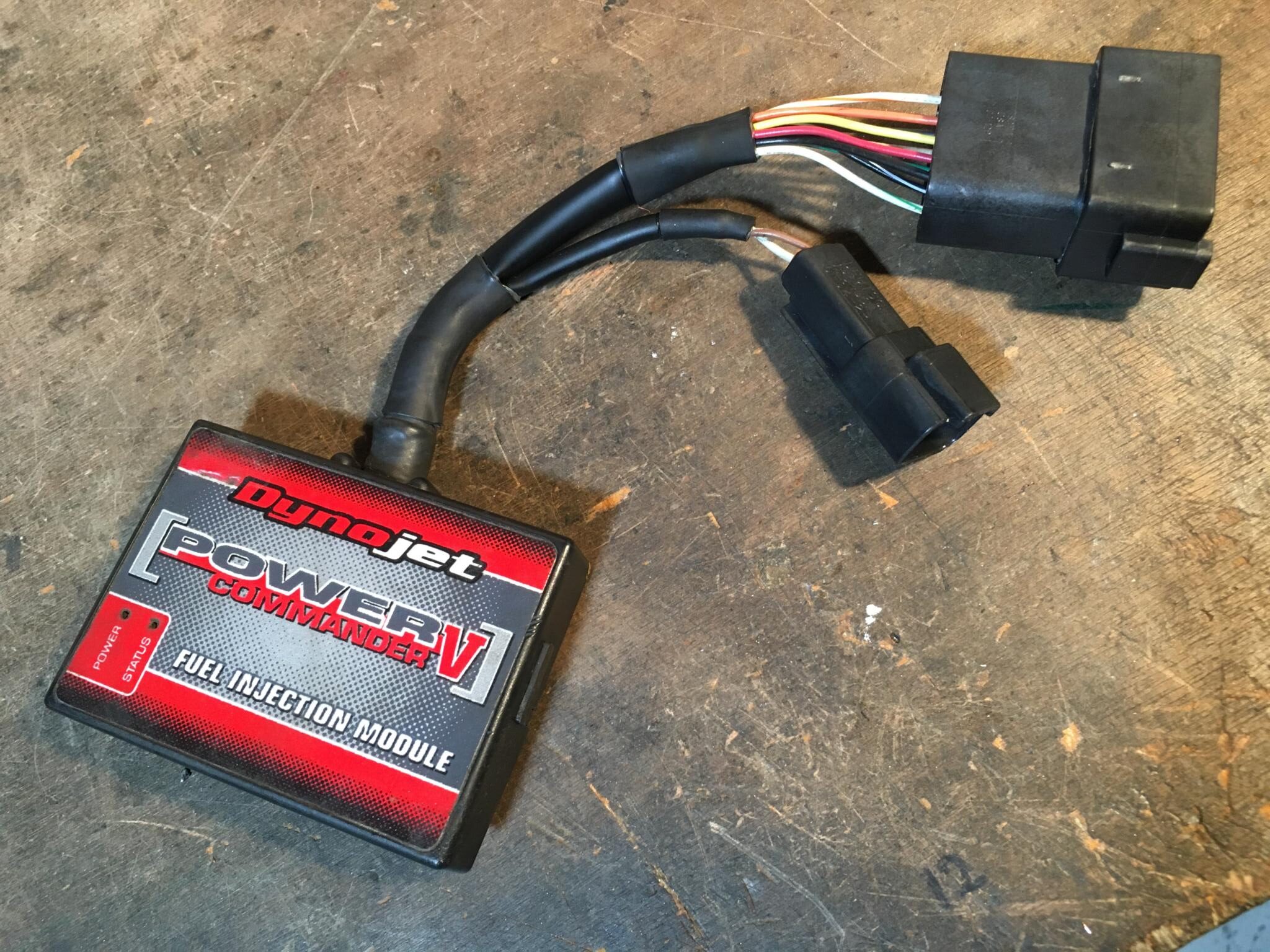 Whenever it’s too fiddly to connect something to the loom directly, you make a sub loom. This is the Power Commander. Its original sub loom used two big plugs and about 18 inches of cable 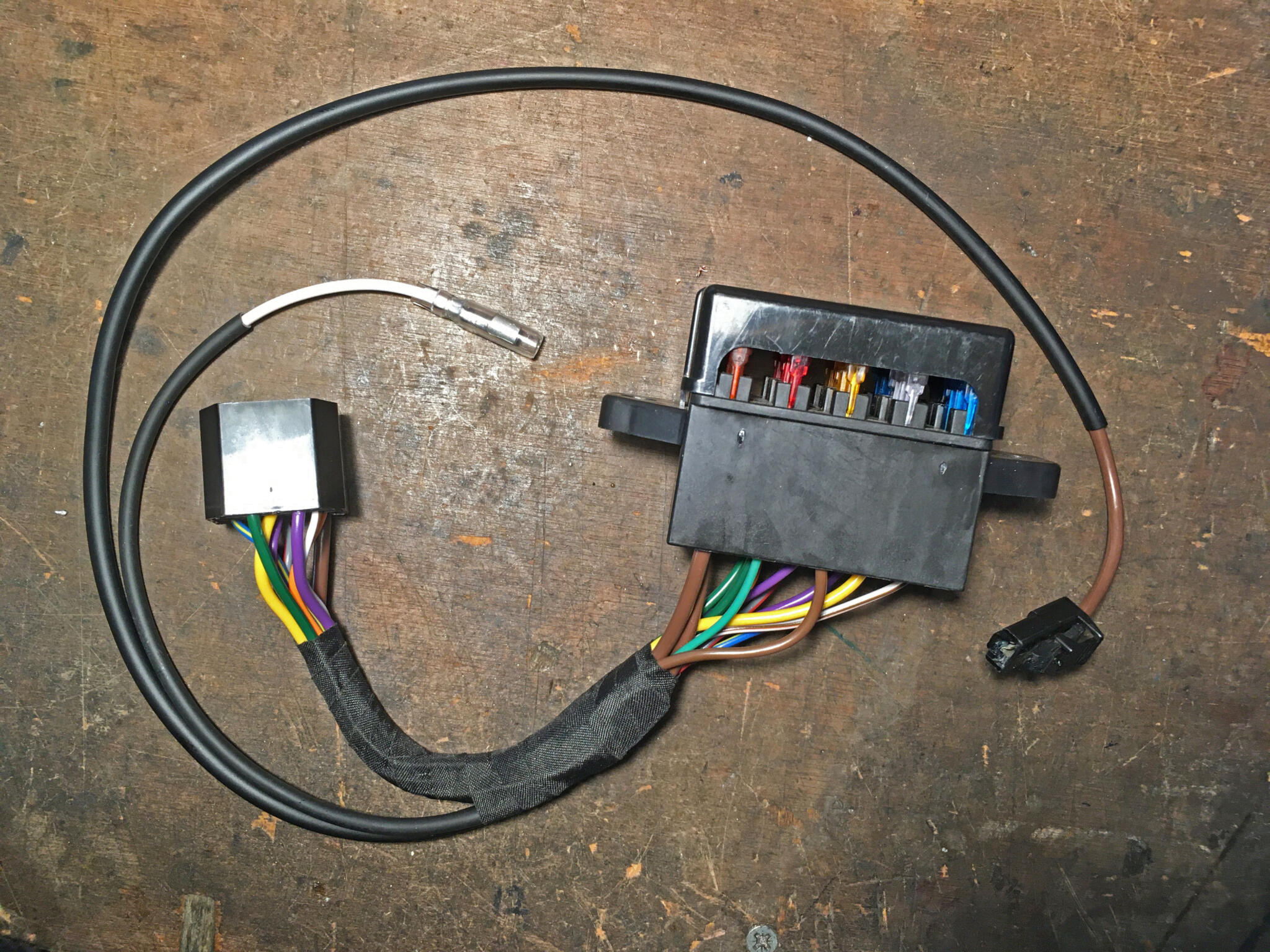 Another sub loom, this time for the fuse box 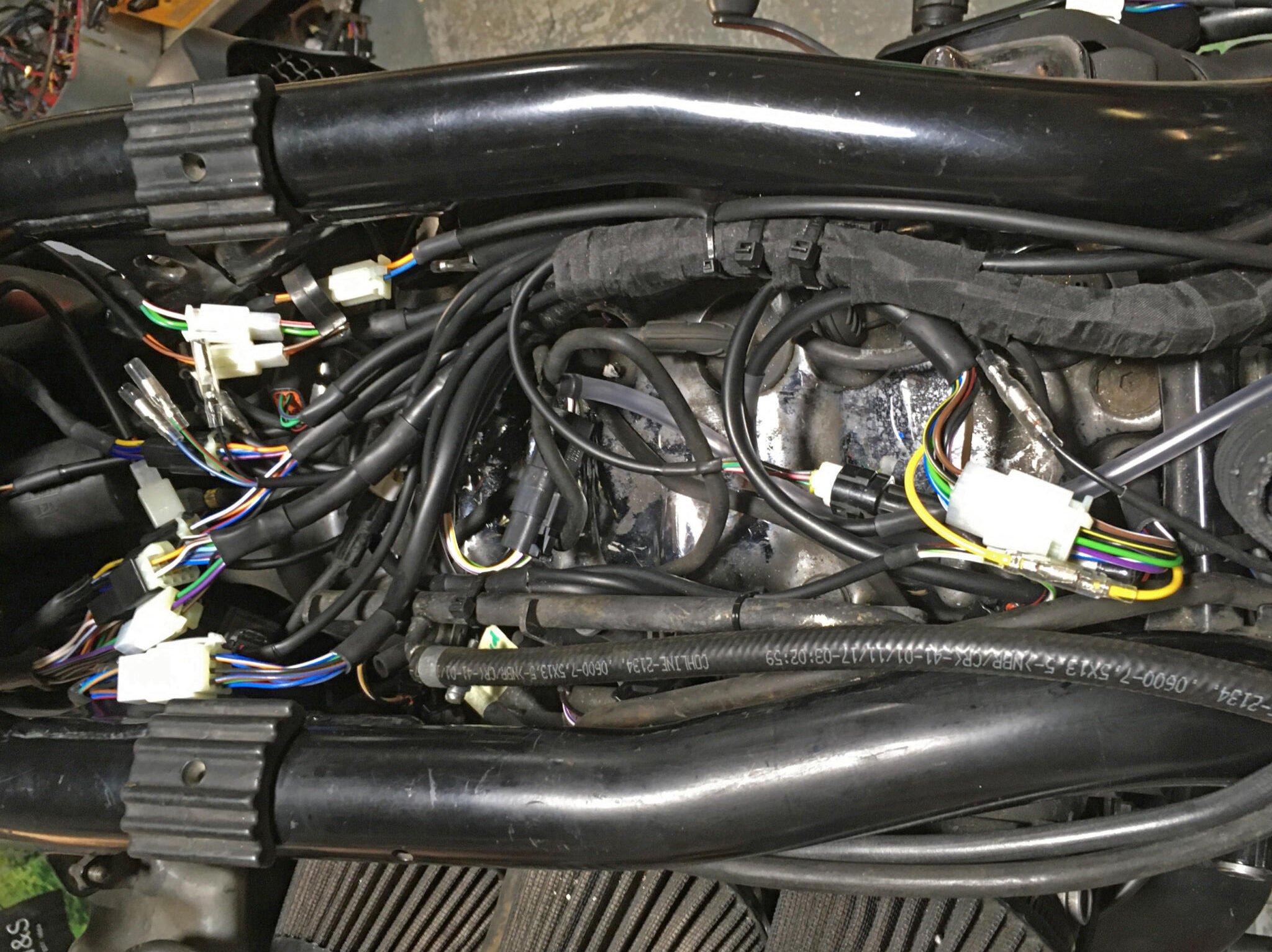 This is the area under the tank. Engine system connectors are all sealed ones, and therefore invisible in this shot. The Miniblock white ones are for switchgear and lights 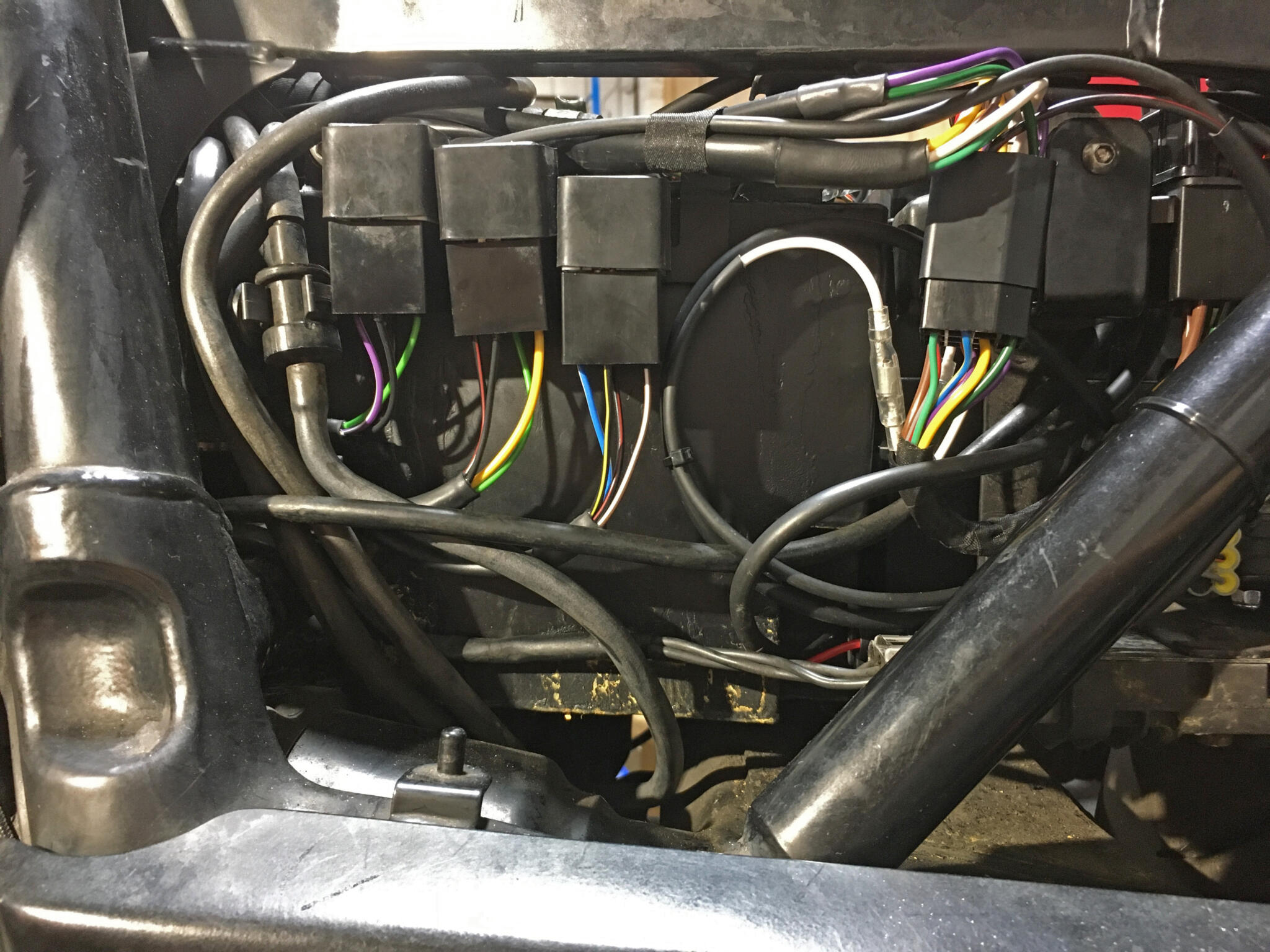 The relays sit on rubber holders which had all rotted away. You can get new ones, as these are. They’re a fiver each 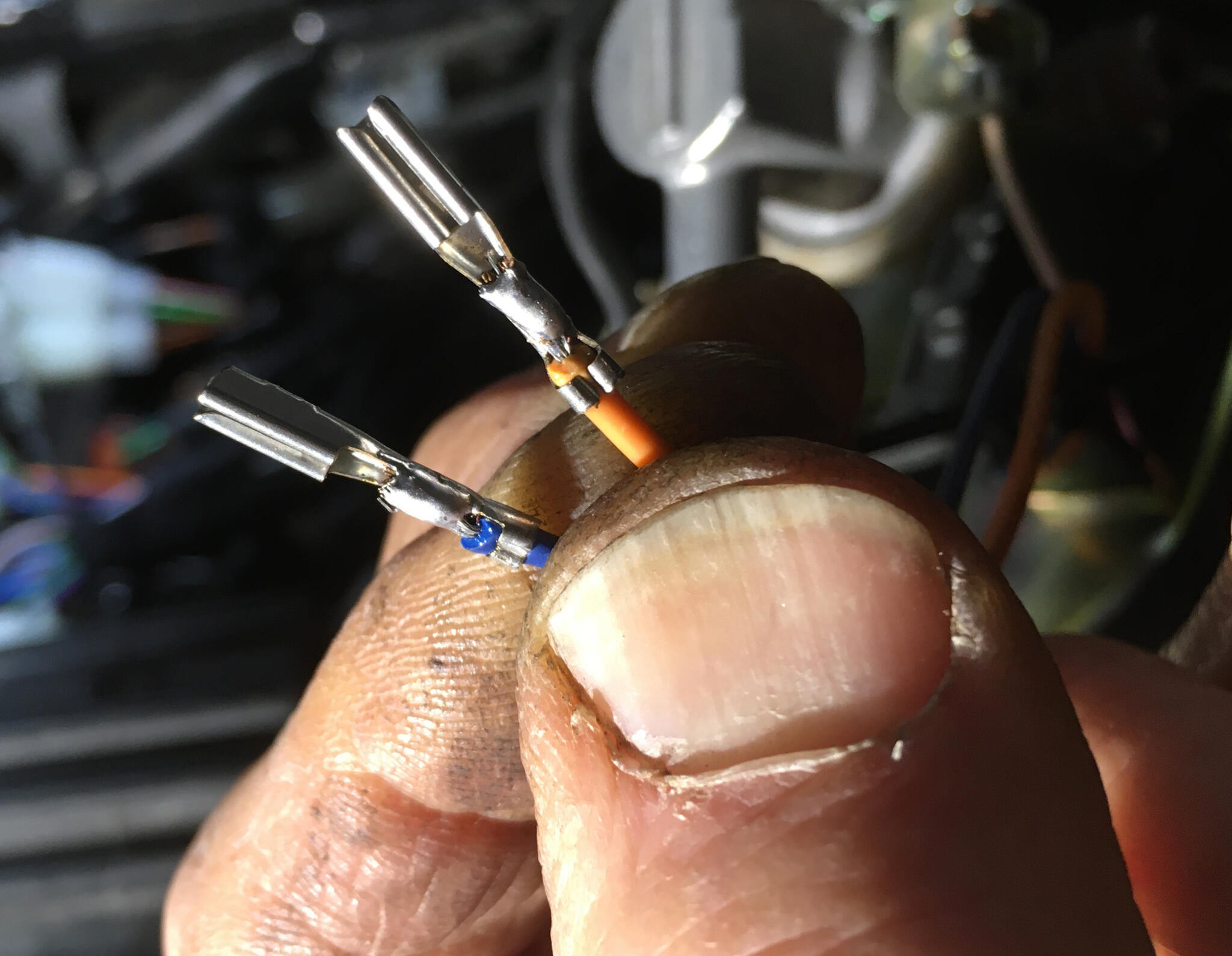 I couldn’t get connectors for the fuel level sensor plug. Luckily it was possible to re-use the connectors to take new cable