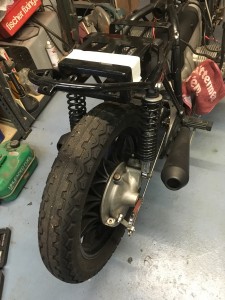 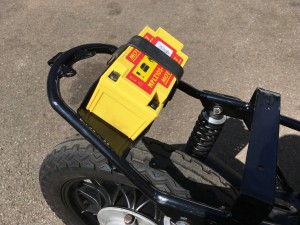 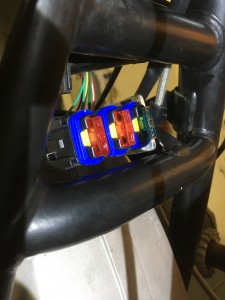 A waterproof fuse array replaced the original fuse board 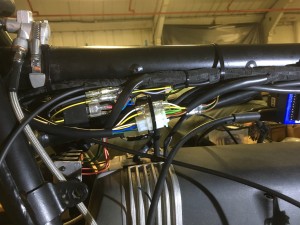 Simon has owned this bike for many years, gradually modifying it as the time and means became available. Eventually he reached the point where a new loom seemed like a good idea to chase away nagging problems.

He’d noticed that the existing battery tray fouled the rear tyre and was pleased when Scotty the fabricator said he could make a new one, and blend the paint into the existing powder coating. Because the battery is so far back it makes sense to use a light battery. After my visit to Rex’s Speedshop I have become a fan of Motobatt’s Lithium Iron battery. It has extensive protective systems built in, and is well suited to bike use. It is also ridiculously light.

Simon wasn’t a fan of BMW’s tangle of wires in the headlight – a result of the R100 wiring loom being designed like a car’s, with lots of relays and external connections. Fortunately when you build a custom loom you can re-organise things to suit. The only complication turned out to be the need for a diode pack to make the pilot and main lighting system behave. The pack is hidden under the main frame tube. I also renovated and lubricated the switchgear, and replaced a relay or two.

The boys in the Splined Hub, where I rent a corner of the workshop, were fascinated by this bike. It’s certainly got a lot of personality.

Once everything was built, the bike started first prod – proof that the Boyer ignition Simon had fitted is a good system. 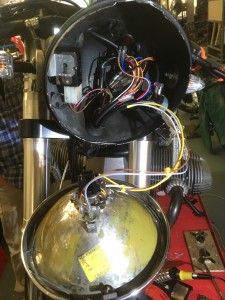 One of Simon’s aims was to de-clutter the headlight. The original wiring is something of a rat’s nest 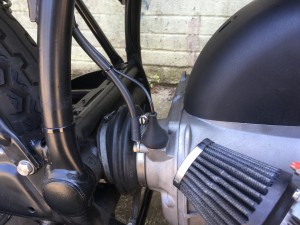 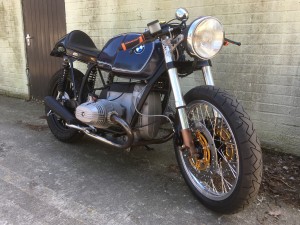 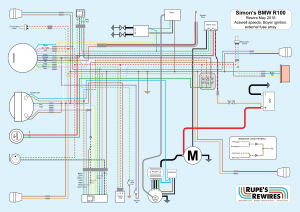 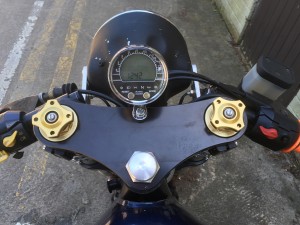