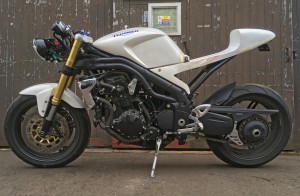 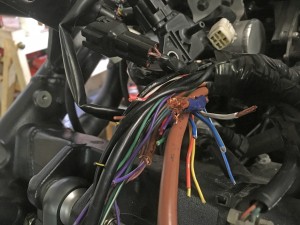 Gulp. Not a very promising start 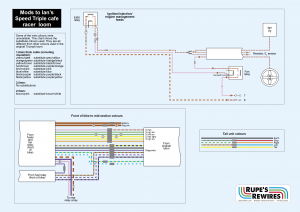 Ian was building the bike which a lot of people wish Triumph would make: a half faired Speed Triple. To do that he’d enlisted the help of fabrication wiz Ian Davis at Etto Motorcycles near Nottingham. Ian is a friend of Rupe’s Rewires, and a splendid good egg. He listens, thinks, has a discussion, and only gets the angle grinder and welder out after a definite plan has been agreed. Also, his metalwork is very tasty.

Anyway, the two of them had organised a new sub frame and front fairing mount, re-imagined the exhaust, and reshaped the GRP bodywork, along with the necessary lights. The bike arrived with the stock loom chopped in half. Two of the relays were now up front with the fuses; the other four relays were in the tail unit, all with lovely aluminium brackets. All we had to do was join the electrics up so everything worked again. No visible cables were allowed in the space under the seat.

Technically, the bike had no handlebars at that point, which was quite funny. But I didn’t drop it.

The rewire job was complicated by the fact that two main feeds had been cut, each featuring several wires which were the same colour (purple or brown) but which came in three different current capacities and did several different things. There was also not much wire length to work with. Extending a bundle of wires cut in the same place can create an inflexible lump, but we managed to avoid that. I had to move the ECU a little, but otherwise the job proved to be possible. The bike was ready just in time for the May 2018 Bike Shed. 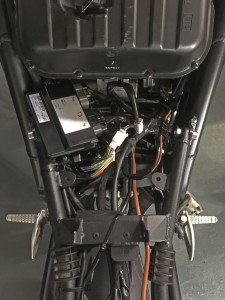 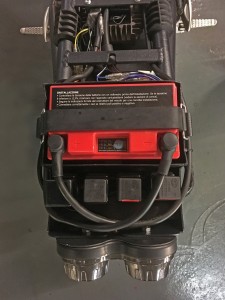 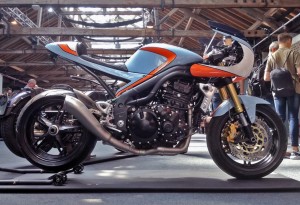 And here it is at the show