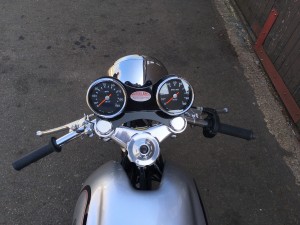 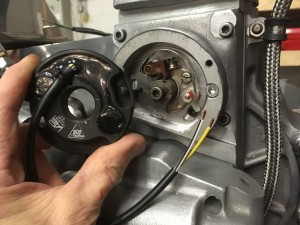 Original points and Vape replacement. We didn’t use either in the end

Owner Bob acquired this rare five-valve engine and decided to build a traditional British cafe racer around it. Weslake built four of them in the 1980s for grasstrack racing, but shortly afterwards five-valve engines were banned. As far as Bob knows this is the only one on the road. The BVR casting on the rocker cover stands for Brian Valentine Racing. Brian is delighted that Bob is getting one of his engines running.

Bob built the bike with a lot of care and thought, and the wiring loom was almost the last job. The original ignition used points, hidden in a D-shaped casing on the right side of the engine. Unfortunately the Wassell Vape ignition Bob was hoping to fit was too big. I consulted Alan Osborn of AO Services aoservices.co.uk about the best way to proceed. A high compression racing single is always going to be hard to start, so battery ignition was a must. I sent Alan the dimensions of the points space, and he reckoned a Boyer Micro Power system could be adapted.

Once I’d cut the fibre stator plate into a D shape and made up some spacers it looked good. Fortunately Bob had a spacer ring to take up the extra depth of the Boyer stator, so the cover could go on (I left it off in the pics – sorry). The bike’s gone back for some final adjustments and oil pump checks, but it will be returning soon for a timing setup session.

As I work in a classic car restoration shop, it’s interesting to see what the other mechanics think of the bikes I get in. Dave, who builds E Type engines, and has been riding all his life, reckons this bike is his favourite. We are looking forward to seeing it run at Jurby at this year’s Classic TT. 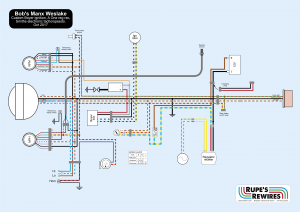 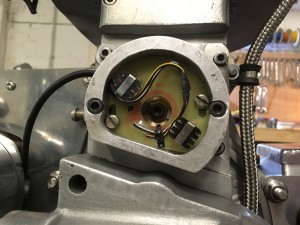 This is the Boyer Micro Power ignition suggested by AO Services 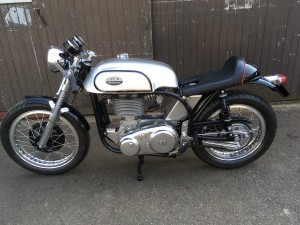 The battery’s in the seat hump. A big Delphi plug isolates it when you take the seat off